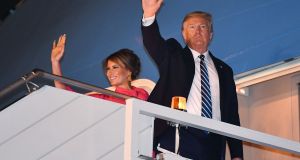 US president Donald Trump and first lady Melania Trump board Air Force One in New Delhi prior to their return to the US from India on Tuesday. Photograph: Mandel Ngan/AFP via Getty Images

US president Donald Trump on Tuesday called the conviction of former film mogul Harvey Weinstein on two sex crime charges “a great victory” for women that “sends a very strong message” about sexual misconduct, even as he sought to highlight the defendant’s ties to Democrats.

Asked whether justice had been done in the case, Mr Trump first stressed that he had never liked Weinstein even though they knew each other through New York circles. He then noted that the Hollywood producer had been an active friend and fundraiser for Democratic politicians over the years.

Mr Trump has himself been accused by multiple women of sexual harassment and sexual assault, and he was famously caught on tape, in a recording that became public shortly before the 2016 election, boasting that he could grab women by their private parts and kiss them because “when you’re a star, they let you do it. You can do anything”.

E Jean Carroll, a longtime Elle magazine advice columnist, accused Mr Trump last year of raping her in a dressing room at an upscale New York department store more than 20 years ago and then sued him for defamation when he called her a liar. She said last week that she had been fired by Elle because of Mr Trump’s insults against her.

The president made no mention of that or other allegations against him on Tuesday, but in the past he has often expressed empathy or given the benefit of the doubt to allies and appointees accused of sexual misconduct such as Senate candidate Roy Moore, Justice Brett Kavanaugh, and former Fox News host Bill O’Reilly.

“Peoples lives are being shattered and destroyed by a mere allegation,” he wrote on Twitter in February 2018 after an aide was accused by two former wives of abuse. “Some are true and some are false. Some are old and some are new. There is no recovery for someone falsely accused – life and career are gone. Is there no such thing any longer as Due Process?” – New York Times

1 ‘Everyone still thinks it’s a joke’ - parents of toddler with coronavirus speak out
2 Coronavirus: At least 750 home carers to be redeployed to nursing homes
3 ‘It’s Sinn Féin against the rest’: NI Executive in conflict over coronavirus
4 Miriam Lord: When did we in our wildest dreams envisage a field hospital in Saggart?
5 Ireland’s pharma industry gears up to make key ingredient for Covid-19 testing
Real news has value SUBSCRIBE