South African budget most important since end of apartheid 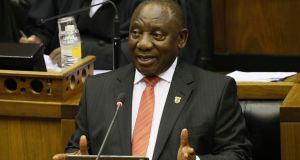 Finance minister Tito Mboweni’s budget address on Wednesday is being hailed by many South Africans as the country’s most important since the end of apartheid because of its perilous economic state.

Mboweni is under pressure to deliver a credible financial plan for 2020, especially in light of the poor reception to president Cyril Ramaphosa’s state of the nation address earlier this month.

Although the president was applauded for clearly acknowledging South Africa’s economic crisis, his plans to tackle it have been sharply criticised by opposition parties and many analysts who increasingly doubt his ability to take hard decisions.

But Ramaphosa has faced growing criticism of his approach to tackling the country’s numerous challenges, with many stakeholders warning it lacks the urgency necessary to save South Africa from a looming economic meltdown.

The country’s rising debt stood at 3.2 trillion rand (€198 billion) at the end of last year, with the bloated public sector’s wage bill out of control.

In addition, many of the country’s state-owned enterprises (SOEs) are in dire financial straits. The power utility Eskom, which is more than 400 billion rand in debt, is the largest drain.

The president’s critics say he is indecisive, and they put this down to his inability to get a factionalised ANC to back the reforms.

In addition, they accuse him of not wanting to undermine the ruling party’s tripartite alliance with the South African Communist Party (SACP) and union federation Cosatu, which is crucial to the ANC’s electoral success.

During the run-up to his annual address, South Africans had hoped the ANC’s Ramaphosa-inspired general election victory in May would give him the impetus to push through unpopular decisions.

However, analysts who spoke to The Irish Times gave a mixed response to his plans to tackle the energy crises, the dysfunctional SOEs and 29 per cent unemployment, while opposition parties have been scathing about them.

Last week, in his response to Ramaphosa’s state of the nation, the Democratic Alliance’s (DA) interim leader John Steenhuien accused the president of failing his country.

“You blew it. It was a simple choice: country, or party,” he said during a parliamentary debate, “And unfortunately for the people of this country, you chose your party.”

The DA wants Ramaphosa to break-up Eskom, to walk away from the ANC’s expropriation without compensation policy, and to relax the country’s “stifling” labour legislation, all of which deter investment. However, the ANC and its left-leaning alliance partners are opposed to all of these suggestions.

The energy crisis was one of Ramaphosa’s main topics of discussion in his state of the nation address, as Eskom is implementing staggered rolling power outages in different areas for the foreseeable future, while its ageing infrastructure undergoes maintenance.

During his speech Ramaphosa said the national grid would be opened to new sources of energy to create additional capacity, including renewable energy, natural gas, hydro power, battery storage and coal.

Furthermore, companies and mines will be allowed to produce their own power, and municipalities in good standing can buy electricity from independent power producers.

However, Mcebisi Ndletyana, an associate professor at the University of Johannesburg’s department of politics and international relations, maintained these interventions in the energy crisis were akin to picking “the low-hanging fruit”.

“He is implementing the easy solutions. When it came to addressing Eskom’s staggering debt and a commitment to downsizing the company, Ramaphosa had little to say,” said Ndletyana.

What is the core problem?

Ramaphosa also told MPs that “far-reaching” measures in Mboweni’s economic reform plan, which are designed to reign in government spending and stimulate economic growth, will be implemented this year.

Previously opposed by the SACP and Cosatu, the plan involves a widespread regulatory review on everything from fuel to banking. It also aims to stimulate competition in all economic areas, especially those dominated by SOEs, such as the energy and telecommunications sectors.

But Ndletyana said that until the president publicly backed the plan’s different elements, he remained unconvinced they would be implemented.

“In the past he hasn’t backed the reform plans of other ministers as they were unacceptable to unions and the SACP. That is the nub of the problem,” he explained.

However, not everyone has been left unconvinced by Ramaphosa’s economic turnaround strategy.

Institute of Security Studies political analyst Gareth Newham said he was “optimistic” that progress could be made on the plan’s implementation because the SACP and Cosatu had publicly backed it.

Newham said it suggested the National Economic Development and Labour Council, the country’s apex social dialogue structure that involves all sections of society, was bearing fruit in terms of finding solutions to the economic crisis that are acceptable to everyone.

“It may be a slow approach to implementing meaningful reforms, but it is the right one for this country, given our divided history,” he said .

While it might be the right approach, the question is: can a South Africa teetering on the brink of economic disaster afford to indulge it?

Cyclone Nisarga makes landfall near Mumbai as storm surge threatens to flood slums 11:46
Sweden should have done more to combat coronavirus, health chief says 10:51
Pope Francis condemns racism and street violence in US 10:20
Trudeau lost for words when asked about clearing of protesters for Trump photo 09:55
Chinese doctor’s death from Covid-19 prompts anger over lack of protection for hospital staff 09:17