US president attends 110,000-strong rally at in Ahmedabad with Indian PM Narendra Modi

Over 100,000 people were in attendance at the world's largest cricket stadium to welcome US president Donald Trump to Ahmedabad, India. Video: Reuters 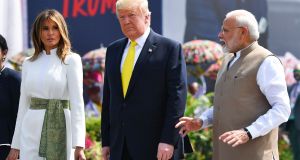 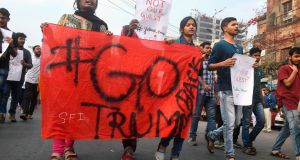 Leftist students activists shout slogans as they protest against the visit of US President Donald Trump to India, in Kolkata on Monday. Photograph: Dibyangshu Sarkar/AFP/Getty Images) 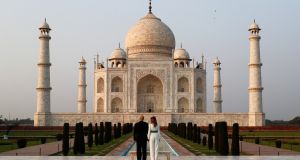 US president Donald Trump called for India to strengthen its strategic ties with America at a massive rally to kick off a two-day visit to the south Asian country, against the backdrop of growing frictions with New Delhi over trade protectionism.

India will sign a deal on Tuesday to buy $3 billion (€2.76 billion) worth of US-made advanced naval helicopters, Mr Trump announced, as he urged India to look to the US as its “premier defence partner”.

“The US looks forward to providing India with some of the best, most feared military equipment on the planet,” the president told India’s prime minister Narendra Modi and the estimated 110,000 Indians at the rally in the world’s largest cricket stadium in Ahmedabad, the heartland of Mr Modi’s political base, in the western state of Gujarat.

Washington is actively cultivating ties with India as a counterweight to an increasingly assertive China. In his speech, Mr Trump called on India to help ensure “a free and open Indo-Pacific for our children and for generations to come”.

While he did not mention China by name, the US president also lauded India as “a nation that rises by setting its people free, and unleashing them to chase their dreams” in contrast to “a nation that seeks power through coercion, intimidation and aggression”.

Mr Trump’s visit comes at a turbulent time for India, as the country battles a severe economic slowdown and mounting tensions over Mr Modi’s efforts to remake the character of India’s democracy to give greater pre-eminence to the country’s Hindu majority.

In Delhi on Monday, rival groups of protesters – some for and others against the new citizenship laws – engaged in violent clashes, leading to the death of a police officer.

Mr Trump and Mr Modi enjoy a strong rapport. During his speech in the stadium, Mr Trump was effusive in his praise for Mr Modi, calling him “an exceptional leader”. The US president has seemed impressed by Mr Modi’s ability to draw large crowds and his appeal to diaspora Indian-Americans.

Mr Trump was silent on Mr Modi’s controversial policies such as its prolonged detention of political leaders in the Muslim-majority Kashmir region and amendments to the country’s citizenship laws, which have caused consternation in Washington.

But he did point to the many unresolved trade issues that bedevil their relationship, such as Indian restrictions on US dairy imports and price controls on American-made medical devices. A series of recent Indian import tariff hikes and sudden policy shifts have also hit American companies such as Amazon and Walmart.

In the weeks before Mr Trump’s arrival, Washington and New Delhi had been working to hammer out a “mini trade deal” for the leaders to resolve at least some irritants in the relationship.

But the talks stalled, and hopes that a deal would be signed this week have faded since US trade representative Robert Lighthizer cancelled a planned trip to India this month. Instead, Mr Trump suggested a more ambitious trade deal might happen in the future

“We will be making a very, very major – almost the biggest ever made – trade deal,” the president said, quipping that Mr Modi “is a very tough negotiator”.

During the rally, which follows a similar joint political appearance at an event in Texas, the leaders hugged repeatedly. Mr Modi called Mr Trump “a true friend of India”.

Mr Trump’s show of affection for India may also be calculated to help him win support in the 2020 general election from the affluent, four million-strong Indian-American community, which has traditionally leaned towards the Democratic party.

Vijay Avasthi (53), an Indian living in the US, said Mr Trump’s relationship with Mr Modi has already helped boost his standing among Indian-Americans in Scranton, Pennsylvania, where he lives.

“Trump will benefit from the Indian vote” at US elections later this year, Mr Avasthi said.

The stadium in Ahmedabad was mainly packed with young college students bussed in for the occasion, officials from Mr Modi’s ruling Bharatiya Janata Party, and large groups of local workers.

Naren Shah, who was born in Ahmedabad and later emigrated to New York where he runs franchise outlets of Dunkin’ Donuts, had travelled back to attend the event.

A US citizen, Mr Shah voted for Mr Trump in the 2016 elections and is also an avid supporter of Mr Modi’s. “Trump has come to my hometown. Are you kidding me?” he said. “This is a tribute to us.” – Copyright The Financial Times Limited 2020