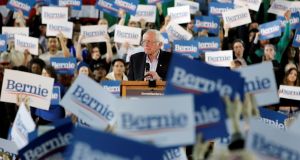 Senator Bernie Sanders at a campaign rally in the Tacoma Dome in Tacoma, Washington, US. Photograph: Jason Redmond/Reuters

The odds of self-described socialist Bernie Sanders becoming America’s next president have shortened dramatically, but there’s little chatter about his chances on Wall Street. Markets are yet to “feel the Bern”, as Credit Suisse noted recently, which prompts the question: are high-flying stock markets underpricing political risk in 2020? Following the Iowa caucuses earlier this month, betting on predictions market PredictIt indicated Sanders has a near 50 per cent chance – more than double his nearest rival – of becoming the Democrat presidential nominee.

Those odds are echoed by FiveThirtyEight, the website founded by celebrated predictions expert Nate Silver. Sanders’s redistributive agenda is widely viewed as negative for stocks, but his ascent in the polls coincided with a similar stock market ascent as the S&P 500 hit fresh all-time highs. It’s a marked contrast with last autumn, when a spike in support for Elizabeth Warren catalysed angst aplenty on Wall Street. Billionaire investors lined up to warn of the threat posed by Warren and the commentary was occasionally hysterical. “This is the f**king American dream she is s***ting on,” protested hedge fund manager Leon Cooperman, who shed tears while discussing the American political outlook on financial network CNBC. Warren, though left-leaning, has said she is a “capitalist to my bones”, while Sanders proudly describes himself as a socialist. Nevertheless, markets have not reacted to his rise in the polls the way they reacted to Warren’s, noted KBW strategist Brian Gardner recently.

The same point is made by Credit Suisse strategist Mandy Xi. Volatility markets “normalised with Warren’s fall in the polls”, but investors “seem to be forgetting about Bernie”.

Why? Some strategists have noted Sanders hasn’t targeted private equity and Wall Street quite as directly as Warren, although the main reason is investors seemingly believe Sanders has little chance of being elected.

Sanders lack of appeal to independents “makes it even more likely that Trump will be re-elected”, argues London-based Capital Economics. That’s echoed by DataTrek Research founder Nicholas Colas, who questions the notion that a Sanders nomination would roil markets.

Rather, investors may cheer for Sanders, assuming his platform of “radically remaking American society/commerce will not resonate” with voters at a time when unemployment is near 50-year lows and a record-breaking number of Americans say they are better off financially compared with a year ago.

The same point is made by Sevens Report Research, which says markets “might welcome a Sanders candidacy, seemingly with the idea that he would not win against Trump”. Bleakley Advisory Group’s Peter Boockvar is especially blunt, saying Sanders “has just about zero chance of winning a presidential election”. That’s an obvious exaggeration. Far from being zero, Sanders’s chances of becoming president are about 4/1, according to bookies. Those odds will shorten substantially if he becomes the nominee of the Democrats, who are currently 5/4 to retake the White House in November’s election.

Remember too that, this time four years ago, you could get odds of 8/1 on Trump becoming president and markets were slow to take him seriously. Many see Sanders as unelectable, but the same was said of Trump. Electability is a “vague, floppy concept”, Prof Nichole Bauer recently told FiveThirtyEight. “We don’t know who is electable until someone is elected.”

Additionally, while Trump’s prospects have brightened substantially, the election remains more than eight months away. Trump is unpredictable; as his former spokesman-turned critic Anthony Scaramucci cautioned recently, “anything could happen” in that time.

If Sanders was elected, what might it mean for stocks? The prospect of increased corporate and capital gains tax rises, curbs on stock buybacks and increased regulation isn’t one Wall Street is keen on.

“Bernie’s prescriptions would be disastrous for the markets,” according to AGF Investments’ Greg Valliere. “He would be viewed with tremendous anxiety by the markets.” Billionaire investor Stanley Druckenmiller, George Soros’s former trading partner, warned last summer a Sanders presidency could catalyse stock market falls of 30-40 per cent. In October, another billionaire hedge fund manager, Paul Tudor Jones, estimated stocks could fall 20 per cent.

More recently, high-profile bond manager Jeffrey Gundlach cautioned that markets were underestimating Sanders, saying he was the biggest threat to stocks in 2020. Others counter that Sanders is a social democrat rather than a socialist. In any event, argues economist and New York Times columnist Paul Krugman, Sanders will have to deal with a congress and a public that is less radical than he is, obliging him to “settle for a more modest progressive agenda”.

Krugman argues it makes little difference who the Democrats choose. A Democrat president would find it hard to steer their party from its political centre of gravity, so the end result is the presidencies of both Sanders and centrist rivals such as Joe Biden would look similar, entailing a “significant but not gigantic expansion of the social safety net, paid for by significant new taxes on the rich”. If Krugman is right, markets might be wary of all Democrats – not just Sanders. Jones certainly thinks so. Jones is a fan of Pete Buttigieg, saying he “would be the best administrator to run this country”, but nevertheless says stocks will fall if any Democrat – even centrists such as Buttigieg and Biden – wins November’s election.

The tone of a recent UBS report is similarly cautious. Each of the leading Democrat candidates is proposing policies “once deemed too radical to garner mainstream political support in the US”, says UBS, pointing to “equity market-unfriendly” policies such as more regulation and higher taxes on corporations and the wealthy.

More than half of the 24 per cent rise in S&P 500 earnings growth over the last two years came directly from the 2017 tax cuts, notes UBS. A complete reversal of the tax cuts would mean “at least” a double-digit percentage earnings hit. In contrast, a Trump re-election “is more low taxation, more deregulation and an indifference about trillion-dollar deficits”, says David Kotok of Cumberland Advisors. “Markets like that.”

Of course, trillion-dollar deficits bring longer-term risks. The non-partisan Congressional Budget Office recently cautioned budget deficits would hit “unprecedented” levels in coming years, noting that not since the second World War has the US seen such large and long-lasting deficits during times of low unemployment. UBS agrees there are “underappreciated risks” of a Trump re-election, including the possibility he would be “even more aggressive and unpredictable” in using tariffs to pursue economic and non-economic goals.

Similarly, while the Democrats’ policy agenda may initially “strain” markets, wealth redistribution and increased infrastructural spending may be positive for jobs growth and domestic demand. Still, while markets look ahead, they tend not to look too far ahead, and the short-term outlook appears to be one of “Trump good, Democrats bad”.

Right now, markets are confident of a Trump victory, but that might change. UBS says markets are “underpricing” the risk of a “material shift” in US tax and regulatory policies under the Democrats. Consequently, if the political outlook changes and Sanders continues to gain, those risks may start to be priced in and we could be in line for some volatility.