Kobe Bryant remembered as an ‘amazing husband’ at public memorial

A gallery of basketball legends joined thousands of Kobe Bryant fans in Los Angeles to pay tribute to the NBA star, his daughter and seven others who died in a helicopter crash in January, 2020. Video: Reuters 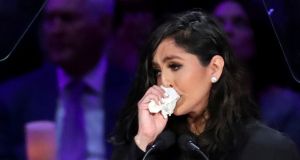 Vanessa Laine Bryant reacts on Monday during a public memorial at the Staples Center in Los Angeles for her late husband, NBA great Kobe Bryant, her daughter Gianna and seven others killed in a helicopter crash on January 26th. Photograph: Lucy Nicholson/Reuters.

Kobe Bryant’s wife offered a poignant portrait of her NBA superstar husband and their daughter at a sold-out memorial service in Los Angeles following their deaths along with seven others in a recent helicopter crash.

Speaking at times through tears, Vanessa Bryant praised her husband’s devotion as she addressed thousands of fans gathered at the Staples Centre to remember Bryant and 13-year-old Gianna.

“God knew they couldn’t be on this Earth without each other,” Ms Bryant said. “He had to bring them home to have them together. Babe, you take care of our Gigi.”

The service took place at the central LA arena where Bryant played for the Los Angeles Lakers for 17 seasons of his NBA career.

The ceremony began with Beyoncé performing her songs XO and Halo with dozens of back-up musicians.

After chat show host Jimmy Kimmel welcomed the crowd, Ms Bryant remembered the family’s life with Gianna and her three siblings and then eulogised her husband, who she had been with since 1999.

“He was the most amazing husband,” she said. “Kobe loved me more than I could ever express or put into words. I was fire. He was ice. Vice versa at times. He was my everything.”

The concourse was a sea of people dressed in the team colours of purple and yellow and others in black. On the scoreboard, the Bryant family’s life flashed by in pictures.

Money from ticket sales will be given to the Mamba and Mambacita Sports Foundation, which supports youth sports programmes in under-served communities and teaches sports to girls and women.

Bryant’s death caused an outpouring of grief across Los Angeles, where he remained the city’s most popular athlete into retirement.

Dozens of public memorials and murals have been installed around the sprawling metropolis, and thousands of fans gathered daily outside the Staples Centre to commiserate after the crash.

A private funeral was held for Bryant and Gianna in Orange County on February 7th. - Reuters