Elizabeth Warren has attacked fellow US Democratic presidential hopeful Mike Bloomberg over his controversial "stop and frisk" policy during his time as mayor of New York. Video: MSNBC 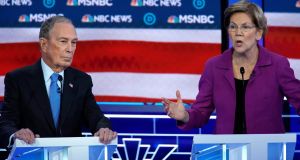 In recent weeks, Michael Bloomberg’s bet on an unconventional route to the Democratic Party’s presidential nomination looked to be paying off. The billionaire former mayor of New York City opted to skip the early contests and join the race in time for March 3rd, when 14 states vote on Super Tuesday. Bloomberg calculated that he could climb in the polls while watching the cluttered field of moderates thin out, leaving him in such a commanding position by the time of the Democratic convention in July that both liberals and leftists would back him as the least-worst option. Meanwhile, he has been pumping hundreds of millions of his $60 billion fortune into television and digital advertising.

Bloomberg’ surge – he hit 19 per cent support in a national poll last week – and the stuttering performance of his chief centrist rival, Joe Biden, appeared to vindicate the approach. But with that success has come greater scrutiny. And Bloomberg is not holding up well under the spotlight. At the eve-of-caucus debate in Las Vegas on Wednesday, the businessman wilted under sustained attack. Elizabeth Warren recalled coarse remarks he had made about women and put him on the defensive over his “muzzling” of female employees through non-disclosure agreements. Bernie Sanders focused on his support, as mayor, for police “stop and frisk” tactics, which predominantly targeted black men. Pete Buttegieg pointed out that he isn’t really a Democrat (Bloomberg ran for the New York mayoralty as a Republican).

Bloomberg’s wealth means he will remain a strong contender, but his first real exposure to the rigours of the campaign has left him weakened. His belief all along has been that both centrists and progressives will be willing to overlook those parts of his record that leave him suspect to many Democrats – on race, tax and his vast wealth – because he is sound on other issues close to their hearts, such as the climate crisis and gun control. Above all, his argument has been that he is the person best placed to defeat Trump in November. After his performance in Las Vegas, that argument seems less persuasive.