Trump marks ‘moment when America fought back’ in Pennsylvania

US president Donald Trump visited the site where hijacked United Airlines Flight 93 crashed as the US paused to mark the 17th anniversary of the September 11 attacks that killed nearly 3,000 people. 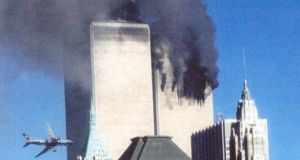 Nearly 3,000 people died on 9/11 when other airplanes were flown into New York’s World Trade Centre and the Pentagon 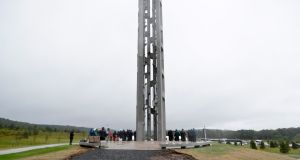 28m (93-foot) tall Tower of Voices at the Flight 93 National Memorial in Shanksville, Pennsylvania., where the tower contains 40 wind chimes representing the 40 people that perished in the crash of Flight 93 in the terrorist attacks of 9/11. Photograph: Keith Srakocic/AP

US president Donald Trump led tributes to the thousands of victims who lost their lives in the terrorist attacks of September 11th, 2001, as America held a series of ceremonies to mark the 17th anniversary of the atrocities.

Mr Trump travelled with his wife Melania to Shanksville, Pennsylvania, where a monument to those who lost their lives on Flight 93 was unveiled. The plane was one of four planes hijacked on the morning of September 11th, leading to the death of almost 3,000 people.

The United Airlines plane crashed in a field in Pennsylvania after passengers tried to gain control of the aircraft. It is believed that the real target of the hijackers may have been the US Capitol in Washington DC.

Speaking at a service in Pennsylvania, Mr Trump paid tribute to those who died. “Today, we mourn their loss. We share their story. And we commemorate their incredible valour,” he said. He said that the field in which they had gathered was “now a monument to American defiance. This memorial is now a message to the world: America will never, ever submit to tyranny.”

Memorial events also took place at Ground Zero in New York City, the site of the attack on the World Trade Center 17 years ago. A guard of honour with members of the New York Police Department, Fire Department and the Port Authority police departments took place at the site.

At 8.46 am local time one minute of silence was observed before the names of all those who lost their lives in the attack were read out, a process that took almost three hours.

At the Pentagon, just outside Washington DC, vice-president Mike Pence and defence secretary James Mattis led tributes to those who died. “We will never forget what took place in this place on that fateful morning,” he said.

“We gather here today to reflect on what we remember – to remember the fallen, their families, and the heroes that day. But be assured, we also gather here to ensure that each succeeding generation knows the story of what happened that dark day and understands why we must learn the lessons of 9/11 and remain ever vigilant in the defence of our nation and our people.”

One hundred and eighty-four people died at the Pentagon on the morning of September 11th, 2011 after a hijacked plane flew into the military headquarters located just across the Potomac river from Washington DC.

One hundred and twenty-five of those killed worked at the Pentagon and department of defence. Fifty nine died aboard Flight 77.