Despite gains, Sweden’s far-right party remains out of power – for now

But pundits say other parties may eventually accommodate the Sweden Democrats 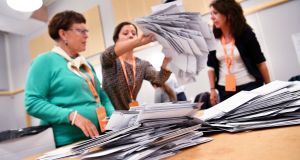 For all the horror and the headlines, between 81 per cent and 84 per cent of Swedish voters failed to cast their ballots for the Sweden Democrats on Sunday, according to exit polls, and there is no chance of anti-immigration nationalists being a formal part of the next government.

But like its Nordic neighbours before it, open, prosperous, liberal, tolerant Sweden is in uncharted waters, facing a right-wing populist insurgency, shunned for decades by the established parties, that has now become a very real political force.

Sooner or later – as happened, gradually, in Denmark, Norway and Finland – some kind of accommodation, from ad hoc parliamentary alliance to full-blown coalition government, looks inevitable. It may not, however, happen tomorrow.

“The Sweden Democrats would dearly like to come in from the cold,” said Anders Sannerstadt, a political scientist at Lund university, “but I’m not altogether sure the time for normalisation is ripe quite yet.”

Formed in the late 1980s by neo-fascist extremists, the Sweden Democrats have leapt in the space of just three elections from a 5.7 per cent share of the national vote in 2010, when they first entered parliament, to 12.9 per cent in 2014 and between 16.3 per cent and 19.2 per cent, according to the exit polls.

The irruption of the radical right party has upended perhaps western Europe’s most stable political order.

For decades, the same two established blocs have defined Sweden’s politics, coalescing more recently into a more formal four-party alliance led by the Moderates on the centre right, and a Social Democrat-Green coalition – backed by the ex-communist Left party – on the centre left.

The rise of the populists, riding high on a raft of alternative political concerns – immigration, integration, identity, crime, welfare chauvinism – that cut across the traditional left-right divide, is forcing a wholesale realignment.

The Sweden Democrats – until the 2015 migration crisis the only party to consistently and forcefully oppose immigration – have poached voters, leaving the Social Democrats with their worst score in a century, the Moderates well down on 2014, and their respective blocs with no hope of a parliamentary majority.

They have also exposed deep divisions within the blocs – not least over how best to deal with the Sweden Democrats themselves. They may have rid themselves of most of their overtly racist elements and toned down many of their more extreme policies, but the anti-immigration party remains ostracised by every other party.

So where next? No one knows. For the moment, the non-co-operation pact holds. But many analysts – as well as the Social Democrat prime minister, Stefan Lofven – suspect that given the chance, the Moderates in particular may not wait too long to test it. “The cordon sanitaire is starting to fray,” said Nicholas Aylott of Södertörn university.

First, though, Sweden will go through a complicated, messy and long-drawn out process of trying to form a new kind of government. “The other parties are going to have to find a new formula,” said Niklas Bolin of Mid Sweden university. “The old one is broken. They will need cross-bloc agreement, inter-party deals.”

A German-style “grand coalition” between the main Social Democrats and Moderates is theoretically possible, if unlikely since the Moderates’ most burning ambition is to oust the Social Democrats. More probable seems another minority government – possibly by just a single party.

That is feasible because in order to rule, Swedish governments do not need to show they have a majority, merely that they do not have one against them: the new prime minister could end up simply being “the candidate parliamentarians dislike the least”, Aylott said.

The result would be a potentially vulnerable government, but not necessarily an impotent or an ineffective one: Sannerstadt cites research showing countries used to minority governments often fare better under them, perhaps because they demand pragmatic, cross-party agreements.

All would depend, though, on the Sweden Democrats, whose wrecking potential could be considerable. Nonetheless, no one sees Sweden descending into disorder. “We do not expect political chaos or gridlock,” said Ana Andrade of the Economist Intelligence unit. “Sweden has a long history of consensus-based policymaking. The parties will find an agreement.”

But if the Sweden Democrats are frozen out of government this time, their eventual inclusion in Sweden’s political process – beginning, almost certainly, with occasional parliamentary support for a minority government – now seems just a matter of time.

“If things carry on as they are going, it will happen,” said Ann-Cathrine Jungar, a far-right specialist at Södertörn university. “In Denmark, Norway, Austria, the far right is now accepted by the centre right. I can see that here one day.”