Conservative Brexiteers line up to condemn terms of transition period 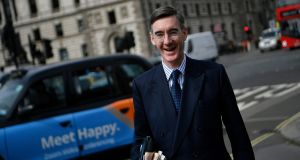 The withdrawal agreement includes a financial settlement that would see Britain pay the EU £39 billion, the rights of EU citizens in the UK and the Border backstop arrangement. It also creates a transition period up to the end of 2020 when Britain will effectively remain in the European single market and the customs union.

Jacob Rees-Mogg, who chairs the European Research Group of Tory eurosceptics, said it was wrong that Britain should remain subject to EU law after it leaves next March.

“Having a period of 21 months when our senior law cannot be stopped in this country, when our senior court is the European Court of Justice is a great mistake and is a bit of the legislation that I for one will find extremely difficult to vote for.”

Former cabinet minister John Redwood said the government was preparing to agree two new treaties with the EU – a withdrawal agreement and a deal on the future relationship – immediately after Britain left the EU treaty that governs membership.

“The money is far too great, the transition delay is far too long, and I’m extremely concerned that we give up one EU treaty only to sign up to another two, which look to me as if they’ll have many of the same problems as the original.”

Sterling rallied on Monday after Mr Barnier told an economic forum in Slovenia that he believed it was possible for the two sides to agree on the terms of a withdrawal agreement by November.

“I think that if we are realistic we are able to reach an agreement on the first stage of the negotiation, which is the Brexit treaty, within six or eight weeks,” he said.

“Taking account the time necessary for the ratification process, the House of Commons on one side and the European Parliament and Council on the other side. We need, we must reach an agreement before the beginning of November. I think it’s possible.”

Both sides acknowledge that a deal will not be agreed at next month’s EU summit in Brussels, but the European Council is expected to hold a special Brexit summit in November.

Downing Street repeated on Monday that Theresa May remained committed to her Chequers proposal as the only viable plan on the table which respects the Brexit referendum, protects British economic interests and addresses the issue of the Border.

Former Brexit minister Steve Baker warned, however, that sticking with Chequers could lead to a “catastrophic split” within the Conservative party, predicting that 80 Tory MPs would vote against it.

“It is absolutely no pleasure whatsoever to me to acknowledge that, but I look at the mood of colleagues and the mood of the Conservative Party in the country and I am gravely concerned for the future of our party.”