International Criminal Court defiant in the face of US threats

US national security adviser John Bolton has hit out at the International Criminal Court (ICC), based in The Hague, ahead of a decision over whether the ICC will investigate US troops in Afghanistan. Video: C-Span 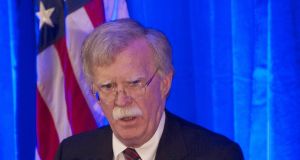 National security adviser John Bolton denounced the legitimacy of The Hague-based court at a speech to the Federalist Society on Monday. Photograph: Andrew Caballero-Reynolds/AFP/Getty Images

The International Criminal Court (ICC) said on Tuesday it would “continue to do its work undeterred” a day after US national security adviser John Bolton threatened sanctions if the tribunal investigated US activities in Afghanistan.

The Hague-based court said it was an independent and impartial institution with the backing of 123 countries.

“The ICC, as a court of law, will continue to do its work undeterred, in accordance with those principles and the overarching idea of the rule of law,” it said in a statement.

ICC prosecutor Fatou Bensouda said last year there was a “reasonable basis to believe” war crimes and crimes against humanity were committed in Afghanistan and that all sides in the conflict would be examined, including members of the US armed forces and CIA.

Mr Bolton said on Monday that if such an investigation was launched, the Trump administration would consider banning ICC judges and prosecutors from entering the United States, sanctioning funds they have there and prosecuting them in US courts.

The ICC was established in 2002 in order to prosecute war crimes and crimes of humanity and genocide in areas where perpetrators might not otherwise face justice.

The US did not ratify the Rome treaty that created the ICC during the presidency of Republican George W Bush. Instead, it adopted the American Services-Members’ Protection Act, nicknamed the Hague Invasion Act because it authorised the use of any means necessary to free US personnel held by the court.

France, a major advocate of the ICC, said the institution should be left to do its work without hindrance.

“France, with its European partners, supports the International Criminal Court, both in its budgetary contribution and in its co-operation with it,” foreign ministry spokeswoman Agnes von der Muhll said in a statement.

“The court must be able to act and exercise its prerogatives without hindrance, independently and impartially, within the legal framework defined by the Rome Statute,” it said.

Mr Bolton’s speech, given on the eve of the anniversary of the 9/11 terrorist attacks, came as an ICC judge was expected to soon announce a decision on a request from prosecutors to formally open an investigation into allegations of war crimes committed by Afghan national security forces, Taliban and Haqqani network militants, and US forces and intelligence in Afghanistan since May 2003.

The accusations against US personnel include torture and illegal imprisonment.

Mr Bolton also took aim at Palestinian efforts to press war crime charges against Israel for its policies in the West Bank, east Jerusalem and Gaza.

He said the US would use “any means necessary” to protect Americans and citizens of allied countries, like Israel, “from unjust prosecution by this illegitimate court”.

“We will not co-operate with the ICC,” Mr Bolton said, adding that “for all intents and purposes, the ICC is already dead to us”.

It was an extraordinary rebuke decried by human rights groups who complained it was another Trump administration rollback of US leadership in demanding accountability for gross abuses.

“Any US action to scuttle ICC inquiries on Afghanistan and Palestine would demonstrate that the administration was more concerned with coddling serial rights abusers — and deflecting scrutiny of US conduct in Afghanistan — than supporting impartial justice,” said Human Rights Watch.

The American Civil Liberties Union (ACLU), which represents several people who claim they were detained and tortured in Afghanistan from 2003 to 2008 and could be victims or witnesses in any ICC prosecution, said Mr Bolton’s threats were “straight out of an authoritarian playbook”.

“This misguided and harmful policy will only further isolate the United States from its closest allies and give solace to war criminals and authoritarian regimes seeking to evade international accountability,” the ACLU said.

Since its creation, the ICC has filed charges against dozens of suspects including former Libyan dictator Muammar Gaddafi, who was killed by rebels before he could be arrested, and Sudanese president Omar al-Bashir, who is accused of charges including genocide in Darfur.

Al-Bashir remains at large, as does Ugandan warlord Joseph Kony, who was among the first rebels charged by the court in 2005. The court has convicted just eight defendants.

The court has been hobbled by the refusal of the US, Russia, China and other major nations to join. Others have quit: Burundi and the Philippines, whose departure, announced earlier this year, takes effect next March.

The Clinton administration in 2000 signed the Rome Statute that created the ICC but had serious reservations about the scope of the court’s jurisdiction and never submitted it for ratification to the Senate, where there was broad bipartisan opposition to what politicians saw as a threat to US sovereignty. –Reuters/AP