Allegations between Moscow and Kiev over warlord’s murder, religion and water supply 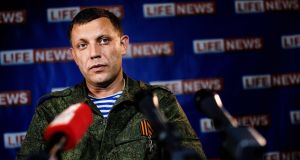 Russia has accused Kiev of hiring a member of Islamic State to kill a leader of Moscow’s proxy militia in eastern Ukraine, as tensions rise between the former allies on issues ranging from religion to shipping to water supply in annexed Crimea.

The FSB security service said its officers had arrested Magomed Gabibulayevich, a native of the restive Russian republic of Dagestan, as he prepared to murder an unnamed separatist warlord in the Smolensk region of western Russia.

The agency claimed on Monday that the suspect said Kiev’s SBU security services was providing weapons, funding and protection to Islamic State (or Isis) members to organise terror attacks in Russia and to kill militia leaders in eastern Ukraine.

Moscow blamed Kiev’s agents for the murder, but the extremely tight security in Donetsk and the fact that Mr Zakharchenko’s death was followed by a big reshuffle of senior figures there, make it more likely that he was killed in a local power struggle or on the orders of Moscow.

Speaking to the BBC’s Ukrainian service, SBU spokeswoman Olena Hitlyanska said of the FSB allegations: “We will not comment on fantasies.”

While the accusations may seem outlandish, they come amid sharpening rhetoric and threats on a host of thorny issues between Moscow and Kiev, whose undeclared war – which Russia launched when Ukraine sought to integrate with the West after a 2014 revolution – has killed more than 10,300 people and displaced 1.6 million.

In recent months, FSB patrol boats in the Sea of Azov, close to the Crimea peninsula that Russia annexed in 2014, have stopped and searched hundreds of ships heading for Ukrainian ports, in what the US state department called “harassment” intended to “undermine and destabilise Ukraine”.

Kiev accuses Russia of launching a creeping blockade that could wreck the economies of Ukraine’s southeastern ports, and it plans to strengthen its coastal defences,

Russia, meanwhile, complained to the UN human rights council on Monday over Ukraine’s decision to cut water flow to the region after it was annexed, but Kiev says it will restore supplies only when Moscow ends its occupation.

As well as clashing militarily, economically and in cyberspace, the neighbours are also at odds over religion, since Ukraine asked Patriarch Bartholomew of Constantinople this year to give its church independence from the Russian Orthodox Church.

As hopes rise in Kiev that its request will soon be granted, senior Russian cleric Metropolitan Hilarion accused Bartholomew this week of acting in a “despicable and treacherous way”.