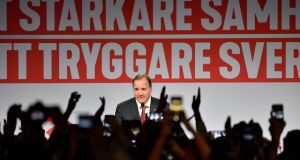 Prime minister and leader of Social Democrat party Stefan Löfven: “The Sweden Democrats don’t have anything to offer . . . [only] growing divisions and hatred.” Photograph: Jonas Ekstršmer/TT

It was a new day in Sweden – literally and figuratively – when prime minister Stefan Löfven spoke, as Sunday’s election night turned into Monday morning.

Sweden’s once-proud Social Democrats had plunged to a historic low of 28.4 per cent but the prime minister, a welder by profession, announced his determination to weld something together from a disappointing result.

Preliminary results saw his centre-left alliance lose support on Sunday, putting them just one seat ahead of the four-party centre-right “alliance”.

After a nail-biting election night, final election numbers won’t be known until possibly Friday after postal ballots and votes of non-resident Swedes are counted.

This is unlikely to change the basic fact that both main blocs are each more than 30 seats short of a parliamentary majority.

And in a new, eight-party parliament, they are facing a stronger rival after the far-right Sweden Democrats (SD) jumped nearly five points to 17.6 per cent support.

Its anti-immigrant, anti-EU campaign – combined with promises to salvage Sweden’s burdened welfare state – appealed to a record number of voters. But Löfven insisted the election-night winner would not emerge victorious from coalition talks.

“The Sweden Democrats don’t have anything to offer,” he said of the third-largest party. “Their budget doesn’t add up. The only thing they have to offer is growing divisions and hatred.”

The prime minister said he favours a grand coalition with the conservative-liberal Moderates. They are less enthused as such an arrangement would require huge compromise. The Social Democrats want new wealth and bank taxes to finance additional spending on welfare and integration projects; the Moderates want to cut taxes while boosting police spending and salaries to improve law and order.

On the hot-button migration issue, both parties want more restrictive asylum rules but the Moderates are pushing harder. Meanwhile, its determination to cut benefits, in a bid to make working more attractive, will find few fans in the Social Democrat camp.

The Social Democrats remain the largest political party in parliament but, aware his bloc is smaller than the opposition camp, Löfven described the result as the “death of bloc politics” in Sweden. But with just 30,000 votes in the difference, the centre-right alliance disputes that Social Democrats have a mandate to lead talks, let alone govern.

On Monday, the four-party Alliance – made up of Moderates, Christian Democrats, Liberals and Centre – rejected an invitation from Löfven to talks, called for him to resign and repeated their determination to form their own government.

Trust will be a key factor for them in talks, in particular whether the smaller Liberals and Centre trust their alliance allies to keep their promise not to co-operate in any form with the SD.

Aware they were being watched closely on Monday, the Moderates and Christian Democrats rejected far-right leader Jimmie Akesson’s invitation for talks on parliamentary co-operation.

Only with SD support – or a promise not to oppose – can Moderate leader Ulf Kristersson become prime minister and return to power the centre-right alliance that ruled from 2006 to 2014.

While the far-right SD polled less well than it was hoping on Sunday, it has grown exponentially from just 5.7 per cent of the vote in 2010. It grew support in rural Sweden and around the western and southern coasts of Gothenburg and Malmö, marked by high migrant populations, riots and gangland killings.

On Monday, analysts put their money on another minority coalition of pragmatic policy and shifting majorities.

“It might not be what Sweden really needs but it is not a recipe for chaos,” said Prof Nicholas Aylott of Södertörn University in a post-election analysis.

For now, Löfven will remain in office, but analysts expect he will resign if he loses a confidence motion when parliament convenes in two weeks’ time.

Political scientist Andrej Kokkonen, of the University of Gothenburg, suggests the centre-right alliance will then attempt to form a new government. “Whether it survives is, however, an open question,” he added.

Time is tight for a deal, let alone post-election shadowboxing, with Swedish parties granted a maximum of four attempts to form a government or having to face a new election within three months.