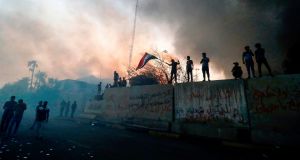 Iraqi protesters wave a national flag outside the burnt-down local government headquarters in Basra, after the hospitalisation of 30,000 people who had drunk polluted water. Photograph: Haidar Mohammed Ali

Iraqi Shia cleric Muqtada al-Sadr has called on caretaker Iraqi prime minister Haidar al-Abadi to step down in the wake of protests that killed 12 in the port city of Basra and elsewhere in the Shia-majority south. “We demand the government apologise to the people and resign immediately,” said Sadr’s spokesman Hassan al-Aqouli.

The latest round of mass demonstrations began a week ago after 30,000 people sickened by polluted water were admitted to hospital, initiating fears of a cholera outbreak. Crowds demanding clean water, electricity and jobs – and condemning rampant corruption – torched government offices, political party and Shia militia headquarters, and the Iranian consulate.

Unrest spread throughout the south and rockets were fired into Baghdad’s fortified Green Zone, which hosts government offices and embassies. Demonstrators called for an end to Tehran’s involvement in Iraq’s affairs.

On Saturday, troops dispatched by Baghdad restored calm and cleaners cleared debris in the city once called the “Venice of the Middle East” because of canals flanked by grand mansions.

Sadr’s call for Abadi’s resignation is certain to stall the formation of a government and could put an end to their effort to form a coalition comprised of non-sectarian, nationalist factions four months after the parliamentary election. It had been hoped that this cabinet would adopt inclusive policies to mollify marginalised Sunnis, sidelined secularists and alienated Kurds.

Sadr emerged from the contest with a plurality of 54 seats; Abadi came third with 42. The election was hardly a vote of confidence for either and demonstrated, once again, Iraq remains a splintered country 15 years after the 2003 US invasion.

Since 165 seats are needed for a majority in the 328-member assembly, Sadr had recruited smaller factions to form an alliance of 177. This constellation did not survive Iraq’s squabbling political elite, which continues to be dominated by pro-Iranian Shia fundamentalists installed by the US. Abadi belongs to this group but not Sadr, who stood against the US invasion, deployed his Mahdi army militia to fight the occupation, and opposes sectarianism and the Iranian connection.

The formation of another Shia sectarian government could ignite an uprising across Iraq. Sunnis have remained largely quiet as earlier Sunni protests against persecution and neglect were put down with considerable brutality. Sunnis could, however, join Shias as they are as badly afflicted by the failure of post-war governments to deliver basic services to the vast majority of Iraq’s 37 million people.

The issue that unites Iraqis is the rampant corruption which has robbed the country of the means to rebuild its war-damaged and deteriorated infrastructure. Although Iraq produces nearly five million barrels of oil a day and earned $63.31 billion (€54.6 billion) in 2017, the general population has seen little benefit from revenues. Transparency International ranked Iraq 169 out of 180, slightly above the most corrupt country, Somalia.

Sadr’s success in the election was due, in part, to his protracted campaign against corruption. He made his name in 2015 by insisting a member of his movement, deputy prime minister Baha al-Araji, resign as he faced an investigation for corruption.