Hurricane Florence: ‘We are preparing for devastation’ 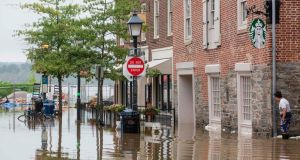 More than 1 million people along the Carolina and Virginia coasts fled towards higher ground on Monday in a mass evacuation ordered days before the expected arrival of Hurricane Florence, a Category 4 storm and the most powerful to menace the region in nearly three decades.

With maximum sustained winds of 210km/h (130 miles per hour), Florence was due to grow even stronger before making landfall on Friday, mostly likely in southeastern North Carolina near the South Carolina border, the National Hurricane Centre (NHC) in Miami said.

“This storm is not going to be a glancing blow. This storm is going to be a direct hit on our coast,” said Jeff Byard, associate administrator for response and recovery at the Federal Emergency Management Agency. “We are planning for devastation.”

Authorities also warned of life-threatening coastal storm surges and the potential for Florence to unleash prolonged torrential rains and widespread flooding across several states, especially if it lingers inland for several days.

In addition to flooding the coast with wind-driven storm surges of seawater as high as 3.7m, Florence could drop as much as 51cm to 76cm of rain in places, posing the risk of deadly flooding miles inland, forecasters said.

US president Donald Trump on Tuesday signed declarations of emergency for both North Carolina and South Carolina, freeing up federal money and resources for storm response.

Virginia, Maryland and the District of Columbia also declared states of emergency.

Mindful of devastation wrought by a string of deadly US hurricanes last year, jittery residents in the Carolinas began the rituals of disaster preparation – boarding up windows and stocking up on groceries, water and fuel.

Classified as a Category 4 on the five-step Saffir-Simpson scale of hurricane strength, Florence stood as the most severe storm to threaten the US mainland this year and the first of its magnitude to take aim at the Carolinas since 1989, when Hurricane Hugo barrelled over Charleston.

As a precaution against Florence, South Carolina governor Henry McMaster ordered an estimated 1 million coastal residents in his state to move inland. Mandatory evacuation orders also were issued for more than 50,000 people from Hatteras and Ocracoke, the southernmost of North Carolina’s Outer Banks barrier islands.

At least 250,000 more were due to be evacuated from the northern Outer Banks on Tuesday, along with some coastal Virginia residents.

“Traffic was backed up for about 9 miles (14km) in places,” said Paul Jones, a retiree who owns a home on the island.

US president Donald Trump, whose administration was criticised as being slow to respond to Hurricane Maria in Puerto Rico last year, cancelled a political rally planned for Friday in Jackson, Mississippi, over safety concerns related to Florence, his campaign said. –Reuters