Resolution to be discussed in Strasbourg on Tuesday 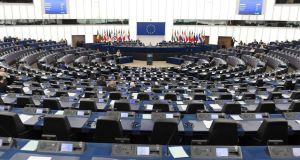 European Parliament: EU peace funding has “decisively contributed to the peace process in Northern Ireland, supports the Good Friday Agreement, and continues to support the reconciliation of the two communities.” Photograph: Frederick Florin/AFP/Getty

MEPs in Strasbourg are expected to strongly back a resolution on Tuesday demanding the continued post-Brexit provision of EU funding of Northern Ireland peace programmes.

The European Parliament will affirm that EU peace funding has “decisively contributed to the peace process in Northern Ireland, supports the Good Friday Agreement, and continues to support the reconciliation of the two communities.”

In a debate on Monday afternoon Regional Affairs Commissioner Corina Cretu welcomed the strong consensus in support of the parliament’s report on peace funding. Peace was hard to build, she said, but easy to destroy – the Commission would maintain its commitment to a programme which demonstrated that cross-border cooperation was not an abstraction but a real part of peoples lives.

The motion was supported by Northern Ireland MEPs although Diane Dodds (DUP) said that at times the funding was not always viewed as the report suggested as “neutral” and she complained that some communities had problems accessing it because of red tape.

Martina Anderson (SF) said the funding was deeply appreciated and should be continued, “Brexit deal or no deal”.

Responding to the debate, rapporteur Derek Vaughan (Socialist group – S&D) said he was not claiming that “no EU funds means a return to the Troubles” , but that the funding had made a valuable contribution.

MEPs and the resolution welcome the commitments made by the UK authorities to continue funding a successor to the PEACE programme and to the European Commission’s inclusion of funding in the next budget for the 2020-2027 period.

Since 1995 and the first EU-funded peace programme, €1.5 billion has been spent in the North promoting cohesion, and economic development. Over €1 billion in EU financial assistance is to be spent in the current financial period to the end of 2020 in the region, of which €230 million will go to the NI PEACE programme (this is 85 per cent EU-funded) and a further €240 milllion goes to the Interreg programme for Northern Ireland, the Republic, and Scotland.