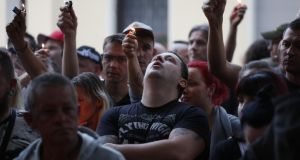 People hold lighters aloft after a mourning march in Köthen on September 9th. Officials pleaded for calm after two Afghans were detained on suspicion of killing a German man. Photograph: Odd Andersen/AFP

The latest march, in the eastern town of Köthen, followed the death of a 22-year-old German following an altercation, allegedly with two Afghans.

The man is reported to have intervened in an argument involving three Afghan men over who had made a woman pregnant. A fight ensued and the man sustained injuries when he fell and hit his head.

A postmortem on Monday indicated the man, who had a history of heart trouble, died of cardiac failure.

“Fatal injuries as a result of kicks could not be established,” said a local official. The two Afghan suspects were known to police for petty crime and assault; one should have been deported in the last week.

The death in Köthen, in the eastern state of Saxony-Anhalt, carries echoes of the fatal stabbing of a man in Chemnitz, in neighbouring Saxony, earlier this month.

“What’s happening here is a race war against the German people, and that’s why we have to defend ourselves,” said David Köckert, head of an eastern offshoot of the xenophobic Pegida movement, to a crowd of about 2,500. “Do you want to continue to be bleating sheep or do you want to become wolves and shred them to pieces?”

Among the largely male crowd, far-right experts identified a who’s who of Germany’s extreme-right scene, many wearing T-shirts with slogans including “Ayrian Nation” and “Fist Salafists”.

On Monday evening, the far-right Alternative für Deutschland (AfD) held a march in the town, linking its own anti-immigration political programme to anti-immigrant feeling in Germany’s east.

In Berlin, a spokesman for Angela Merkel condemned the behaviour of participants at Sunday’s gathering. “At the end of the day in Köthen, a video shows open Nazi chants – something that affects us and leaves us outraged,” said Steffen Seibert, the chancellor’s spokesman.

Two weeks on, events in Chemnitz, the stabbing, asylum-seeker suspects and subsequent clashes between left- and right-wing extremists continue to preoccupy political Berlin.

Politicians of all parties condemned the reaction in the city, in particular reports and videos of a mob chasing non-Germans through the Saxon city.

But Germany’s domestic intelligence head, Hans-Georg Maassen, has caused surprise – and no small annoyance – for telling the Bild tabloid his agency had “no proof” that a video claiming to show attacks on migrants was authentic.

Far-right groups have seized on his remarks as proof of a conspiracy against them. On Monday Mr Maassen had submitted a report on his remarks to the federal government, which is being studied in Berlin.

Back in Köthen on Monday, locals laid flowers and lit candles to the 22-year-old dead man.

“People are sad, shaken but also furious that a person died after trying to arbitrate in a dispute,” said Uwe Schulze, a local Christian Democrat councillor, to state television.

His interview was interrupted by passersby – women and men – shouting Volksverräter – traitor of the people.

Köthen’s mayor Bernd Hauschild said he knew of “no problem to date with right-wing groups or violence” in his town.

Saxony-Anhalt state premier Reiner Haseloff insisted Köthen would not escalate to another Chemnitz. “But what we have noticed,” he said, “is how well-connected the extreme right are across Germany, and how quickly they can activate themselves.”