Trump insists party is united after blistering rebuke by senators

Republicans say president is ‘reckless, outrageous and undignified’ and ‘debasing’ US 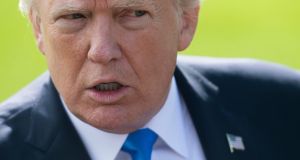 US president Donald Trump insisted there was “great unity” within the Republican party, a day after two Republican senators launched blistering attacks on the president.

Speaking as he departed for Dallas to meet Republican fundraisers, Mr Trump described a lunch meeting with Senate republicans on Tuesday – which was overshadowed by a public feud with Senator Bob Corker and a devastating speech by Senator Jeff Flake – as a “love fest”.

In an extraordinary speech on the Senate floor shortly after the lunch, Mr Flake accused the US president of “reckless, outrageous and undignified” behaviour as he announced his intention not to run for re-election. Hours earlier, Senator Corker, the chair of the foreign relations committee, accused Mr Trump of “debasing” the nation.

But Mr Trump hit back on Wednesday in lengthy comments to the media and on Twitter. “The reason Flake and Corker dropped out of the Senate race is very simple, they had zero chance of being elected. Now act so hurt & wounded!” he said in an early-morning tweet, his first public comments on the controversy.

He returned to the theme as he spoke to reporters before boarding Marine One helicopter en route to Dallas, describing Mr Flake’s decision not to run as “the right decision for him” which would allow him to “get out somewhat gracefully”.

Recalling how he first mistook Mr Flake for a Democrat when he saw him on TV, he predicted that Mr Flake’s departure would benefit the president in Arizona. “I think I am helped greatly in Arizona by what happened with Senator Flake . . . I’m very high in Arizona, they like me . . . they like security at the border.”

Mr Trump also criticised the media for making him appear “more uncivil than I am.” “I went to an Ivy League college . . . I’m a very intelligent person,” he said.

While the stinging rebukes from the two senators have exposed divisions within the Republican party over the president’s conduct, no other senators have publicly endorsed Mr Flake and Mr Corker. Neither senator is running for re-election in 2018.

In an interview on Wednesday, Mr Flake stood by his comments, expressing belief that other senators would follow his lead. “I hope we’ve reached a tipping point, where we don’t continue to normalise, [be] silent at the kind of behaviour we’ve seen,” he said.

Mr Trump also denounced as a “disgrace” reports that the Hillary Clinton campaign and the Democratic National Committee helped fund research that went into the “Russian dossier” compiled by former British spy Sir Christopher Steele which alleged links between the US president and Russia.