Myeshia Johnson says conversation with president made her cry with anger

Myeshia Johnson, whose husband Sgt La David T Johnson was killed during a US army mission in Niger, has said that US president Donald Trump could not remember her husband's name during a condolence phone call. Video: ABC 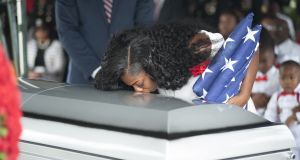 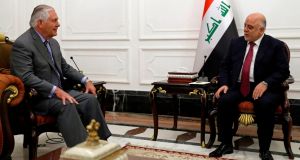 The controversy over US president Donald Trump’s phone call to a widow of a US soldier killed during an ambush in Niger has deepened after the president contradicted the bereaved wife’s account of their conversation and a top Pentagon official was forced to make a public statement on the attack.

Myeshia Johnson, whose husband was one of four soldiers killed in an ambush in Niger on October 4th, broke her silence in a TV interview on Monday, accusing Mr Trump of making her cry and alleging that he had forgotten her husband’s name during the phone call.

“The president said that he knew what he signed up for but it hurts anyways . . . it made me cry because I was very angry at the tone of his voice and how he said it,” she told US network ABC. She also said that Mr Trump had stumbled as he tried to remember her husband’s name. “That’s what hurt me the most because if my husband is out here fighting for our country and he risks his life for our country, why can’t you remember his name?” she said.

Mr Trump refuted her statement on Twitter. “I had a very respectful conversation with the widow of Sgt. La David Johnson, and spoke his name from beginning, without hesitation!” he tweeted.

The controversy has dogged the Trump administration for almost a week, also embroiling the White House in a feud with Florida Democratic congresswoman Frederica Wilson who was in the car with Ms Johnson and heard the phone call.

I had a very respectful conversation with the widow of Sgt. La David Johnson, and spoke his name from beginning, without hesitation!

Wacky Congresswoman Wilson is the gift that keeps on giving for the Republican Party, a disaster for Dems. You watch her in action & vote R!

It has also raised questions surrounding the circumstances of the October 4th ambush during which four US officers died. Mr Johnson was killed when he was separated from his 12-member team which came under attack from 50 Islamic State fighters. The White House and the Pentagon have confirmed that an investigation is under way into the incident.

In a surprise press conference at the Pentagon on Monday, chairman of the joint chiefs of staff, Joseph Dunford, said that the US unit had requested back-up while on its regular reconnaissance mission an hour after initially making contact with its partner forces. He said he could not answer definitively if the body of David Johnson was found one mile away from the scene, though he confirmed that the body was recovered on October 6th, two days after the firefight. General Dunford said he believed that the attack was carried out by local affiliates of Islamic State.

The deaths of the four US servicemen has also turned focus on the US’s broader role in the region. Several senators and members of congress have said that they were unaware that the US had 1,000 troops stationed in the west African country, despite the Pentagon insisting that it has kept congress informed.

As questions over the Niger operation mounted in DC, US secretary of state Rex Tillerson continued his week-long tour of the Middle East, India and Europe, making a surprise visit to Afghanistan and Iraq on Monday – his first visit to both countries since his appointment as US secretary of State.

He met president Ashraf Ghani and senior Afghan officials at a heavily fortified American military base, 30 miles north of the capital, Kabul. In comments to journalists, he called on Pakistan to stop harbouring members of the Taliban, and suggested there could be a place for the organisation in the Afghan government “if they are ready to come, renouncing terrorism, renouncing violence and being committed to a stable prosperous Afghanistan”.

Sixteen years after the start of the war in Afghanistan, the US still retains about 11,000 troops in the region, with Mr Trump indicating in August that he could provide up to 4,000 more.

Following a two-hour stop-over in Afghanistan and brief return to Doha, Qatar, Mr Tillerson then travelled to Baghdad where he met with Iraqi prime minister Haider al-Abadi.

Speaking alongside Qatari foreign minister Sheikh Mohammed bin Abdulrahman al-Thani earlier in the day, Mr Tillerson called on all parties in the five month-old Gulf dispute, which has seen Qatar ostracised by its Gulf neighbours, to “find a way to deal with their differences”, warning that the dispute “has had negative consequences economically and militarily for those involved”.

Mr Tillerson is also due to visit Pakistan and India during his week-long visit, before concluding his trip in Geneva.