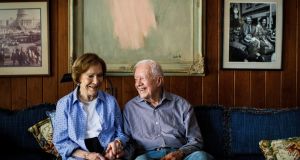 Former president Jimmy Carter and Rosalynn Carter at home: “[Barack Obama] made some very wonderful statements, in my opinion, when he first got in office, and then he reneged on that.” Photograph: Dustin Chambers

Most people would run away screaming at the thought of working for a boss who humiliates subordinates in public, throttles them in private, demands constant flattery, spends all day watching cable TV and behaves in a wildly unpredictable way.

And yet, there is someone who is eager to work for president Donald Trump. Curious, but it’s a Democrat. And even curiouser, it’s a fellow member of the presidents’ club. And curiousest, it’s someone whom Trump has disparaged on Twitter as one of the worst presidents in history. Miracles can happen. No one knows that better than Jimmy Carter, who defied all odds 40 years ago to leap from his peanut farm to the White House and defied all odds again two years ago to beat brain cancer. The 93-year-old would like to pull another rabbit out of a hat and enter into a productive partnership with Trump over North Korea. When you think about it, though, it makes sense. One of the basic premises of the Carter Centre is that you should talk to dictators.

The closest our two countries had come until now to resuming the Korean War was in 1994. Carter flew into Pyongyang, North Korea, on his own over the objections of then president Bill Clinton and struck a deal with Kim Il-sung, the grandfather of the current leader, Kim Jung-un, and the man the grandson models himself on – right down to his hairstyle. North Korea secretly cheated on the deal by pursuing another path to a bomb just four years later.

So is it time for another Carter diplomatic mission, and would he do it for Trump, his polar opposite in so many ways? “I would go, yes,” he said, wearing a big “JC” belt buckle and sipping coffee in his ranch house, which is chockablock with Carter family paintings and with furniture he made himself, including his four-poster bed. Rosalynn sits nearby, chiming in slyly at moments.

I told him that the big shots in Washington were terrified about the childish, bellicose tit-for-tat tweeting battle between the Dotard and Little Rocket Man. “I’m afraid, too, of a situation,” he said. “I don’t know what they’ll do. Because they want to save their regime. And we greatly overestimate China’s influence on North Korea. Particularly to Kim Jong-un. He’s never, so far as I know, been to China. ” Carter continued: “And they have no relationship. Kim Jong-il did go to China and was very close to them.”

He said that the “unpredictable” Kim Jong-un makes him more nervous than his father, Kim Jong-il, and that if the young leader thinks Trump will act against him, he could do something pre-emptive. “I think he’s now got advanced nuclear weaponry that can destroy the Korean Peninsula and Japan, and some of our outlying territories in the Pacific, maybe even our mainland,” Carter explained.

He said he has talked to Lieut Gen HR McMaster, Trump’s national security adviser, who is a good friend, including at Zbigniew Brzezinski’s funeral when McMaster asked to sit next to Carter, but has so far received a negative response. “I told him that I was available if they ever need me,” he said. When I asked about Trump souring the US’s image in the world, Carter defended his successor. “Well, he might be escalating it, but I think that precedes Trump,” he said. “The United States has been the dominant character in the whole world and now we’re not any more. And we’re not going to be. Russia’s coming back and India and China are coming forward.”

Holy malaise. He also said he liked Trump’s initiative reaching out to Saudi Arabia. He doesn’t know Jared Kushner but is not totally dismissive of the idea that the son-in-law could succeed where others have failed. “I’ve seen in the Arab world, including the Palestinian world,” he said, “the high esteem that they pay to a member of one’s own family.” Indeed, Carter was harder on former president Barack Obama during the interview than he was on Trump. Both Carter and Trump had stern, demanding fathers. “Daddy expected me to be perfect,” Carter told me. “So I obeyed his orders and his wishes.”

Saying that he did not think “there’s much hope now that Israelis will ever permit a two-state solution”, he knocked Obama on the Middle East: “He made some very wonderful statements, in my opinion, when he first got in office, and then he reneged on that.”

Recalling that “we have 22 votes in our family and Obama got all 22 of them”, he complained that Obama had “refused” to talk to North Korea more. Then Carter lamented the fact that Obama joined in the bombing of Yemen, which Carter says is the most interesting place he’s ever been. (He even tried chewing khat, an addictive shrub that acts like amphetamines.)

I asked if he had Obama’s email address. “No,” he said flatly. I wondered about his relationship with other presidents, given his body language in the famous picture where he stood off to the side, which he told Brian Williams was deliberate because “I feel that my role as a former president is probably superior to that of other presidents.”

“I had my best relationship, when he was in office, with George HW Bush,” he said. Carter is also not as bothered as some by Trump’s Vladimir Putin bromance. “At the Carter Centre,” he said, “we deal with Putin and the Russians quite frequently concerning Syria. ”

Did the Russians purloin the election from Hillary Clinton? “Rosie and I have a difference of opinion on that,” he said. She looked over archly. “They obviously did,” she said. He said: “I don’t think there’s any evidence that what the Russians did changed enough votes, or any votes.” Rosalynn pressed, “The drip-drip-drip about Hillary.” Carter noted that in the primary, “We voted for Sanders.”

I asked the famously ethical Carter what he made of Obama’s post-presidential string of $400,000 speeches. “I don’t care if he gets rich or Clinton gets rich or whatever,” he said. “I don’t want to get into a bragging position; I’m not trying to do that. But I announced when I was defeated I was not going to be on corporate boards, I was not going to try to enrich myself with speeches. I was patterning my policy after Harry Truman. ”

When I compared the Clinton Foundation with the Carter Centre, Carter noted: “Rosie and I put money in the Carter Centre. We never take any out.” I wondered how the starchy Carter, who put out a White House edict that nobody could fly first class, felt about the louche Trump White House, where conflict of interest has been replaced by confluence of interest. “I think the media have been harder on Trump than any other president certainly that I’ve known about,” Carter replied. “I think they feel free to claim that Trump is mentally deranged and everything else without hesitation.”

Since Rosalynn’s focus as first lady was mental health, I asked her if we should break the last taboo and let presidents have a White House shrink. “I think it might help them,” she said with a smile. She told me that she was left out of a first ladies’ lunch held by Michelle Obama on the issue of mental health, making it clear that she was still hurt. On the issue of tearing down Confederate statues, the former president mused: “That’s a hard one for me. My great-grandfather was at Gettysburg on the southern side and his two brothers were with him in the Sumter artillery. One of them was wounded but none of them were killed. I never have looked on the carvings on Stone Mountain or the statues as being racist in their intent. But I can understand African-Americans’ aversion to them, and I sympathise with them. But I don’t have any objection to them being labelled with explanatory labels or that sort of thing.”

On the issue of National Football League players kneeling, Carter was less sympathetic: “I think they ought to find a different way to object, to demonstrate. I would rather see all the players stand during the American anthem.” I asked if he thought the president was deepening racial divisions. “Yes, I think he is exacerbating it,” he said. “But maybe not deliberately.” As a genuinely pious man, how does he feel about the Two Corinthians president bonding with evangelical voters, who do not desert Trump no matter how coarse his language or how upsetting the “Access Hollywood” tape was? Don’t the evangelicals seem cynical to stick?

“Apparently not,” he replied. In The Art of the Deal, Trump wrote that Carter came to his office to ask for $5 million for his presidential library. Trump was impressed that Carter had “the nerve, the guts” to ask for something so “extraordinary” but didn’t give it to him. “He bragged about it,” Carter said wryly. “That was one of his major selling points: ‘I turned down Jimmy Carter.’” But now the indefatigable Carter is back with another nervy proposal. Will Trump bite? – (New York Times service)