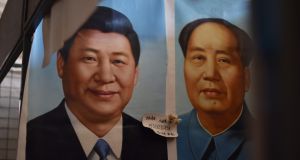 China’s ruling Communist Party has voted to revise its constitution to enshrine in it Xi Jinping’s political philosophy, making him the country’s most powerful leader in generations and placing him in a strong position ahead of a leadership reshuffle.

The revisions to the constitution form a solid foundation for Mr Xi to set policy for the next five years and even beyond that – no Chinese leader since founder Chairman Mao Zedong has succeeded in having their philosophy included in the party’s governing ideology while still in power.

“Living in such a great era, we are all the more confident and proud, and also feel the heavy weight of responsibility upon us,” Mr Xi told the closing session of the twice-a-decade congress in Beijing, which was attended by more than 2,300 delegates.

Delegates voted unanimously to include “Xi Jinping Thought on Socialism with Chinese Characteristics for a New Era” in the constitution.

“This thought must be adhered to and steadily developed on a long-term basis,” the resolution said.

This means the Communist Party’s 89 million members will be expected to study Xi Jinping Thought, as well as students, civil servants and workers at state-owned enterprises.

His address to the closing session was considerably shorter than last week’s 3½-hour speech opening the congress, in which he outlined his principles of socialism with Chinese characteristics and hailed a new era for China.

It elevates Mr Xi, who came to power in 2012 and is secretary general of the party, as well as president and head of the military, to the same status as Mao and the economic reformer Deng Xiaoping.

Mr Xi’s predecessors Hu Jintao and Jiang Zemin also had their philosophies enshrined in the party’s guiding principles, but they were not mentioned by name. Economic reformer Deng Xiaoping’s principles were included after his death.

The text also added his Belt and Road development initiative, military reform and his swingeing anti-corruption campaign that has ousted many senior cadres.

The Communist Party is due to announce the new standing committee of the politburo, the pinnacle of power in China, on Wednesday. The committee is currently made up of seven people.

One leading figure who will not be on the standing committee is Mr Xi’s anti-corruption enforcer Wang Qishan. His name was not included in the central committee that was announced on Tuesday.

It is possible, however, that he could be given another senior role in the next few months.