US Republican senator Jeff Flake, one of the most prominent critics of Donald Trump, has said he is out of step with his party and will not seek re-election. Video: Reuters 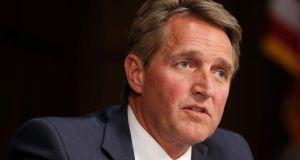 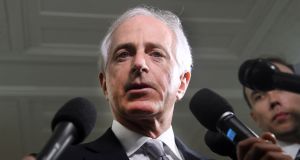 Senator Bob Corker, a Republican from Tennessee, speaks to members of the media on Capitol Hill in Washington, DC, US. Photograph: Olivier Douliery/Bloomberg

US Republican senator for Arizona Jeff Flake, one of the most prominent critics of president Donald Trump, said on Tuesday he was out of step with his party and would not seek re-election.

Then, in a dramatic speech on the Senate floor, Mr Flake said American politics had become inured to “reckless, outrageous and undignified” behaviour from the White House, adding that “the instinct to scapegoat and belittle threatens to turn us into a fearful, backward-looking people”.

“We must stop pretending that the degradation of politics and the conduct of some in our executive branch are normal,” Mr Flake said. “They are not normal.”

“When such behaviour emanates from the top of our government, it is something else. It is dangerous to democracy.”

He criticised the “flagrant disregard of truth and decency” which he says is undermining US democracy.

“It is time for our complicity and our accommodation for the unacceptable to end.

“I will not be complicit or silent.”

Divisions between Trump and Republican politicians on tax reform were laid bare on Tuesday, as the Republican-controlled Congress races to pass a comprehensive tax reform package by the end of the year.

In a rare visit to the US capital by the president on Tuesday, Mr Trump attended the weekly luncheon of Republican senators in a bid to advance the party’s plans on tax reform.

But the meeting was overshadowed by an escalating feud between Mr Trump and senate Republican Bob Corker, as well as Mr Flake’s speech.

The Republican Party and the Trump administration have set their sights on achieving a major tax reform package by the end of the year, as they struggle to demonstrate any significant legislative achievements since January.

However, continuing tensions between the White House and Republicans on Capitol Hill are making that job difficult.

In a CNN interview on Tuesday, Mr Corker said: “The president has great difficulty with the truth on many issues.

“It’s amazing. Unfortunately world leaders are very aware that much of what he says is untrue.

“Certainly people here are because these things are provably untrue. They’re just factually incorrect and people know the difference.

“I don’t know why he lowers himself to such a low, low standard and debases our country in that way, but he does.

“He is purposely breaking down relationships we have around the world that had been useful to our nation . . . I think the debasement of our nation is what he’ll be remembered most for.”

In one of several tweets attacking Mr Corker on Tuesday morning ahead of the lunch, Mr Trump accused Mr Corker of opposing Republican efforts at tax reform. “Isn’t it sad that lightweight Senator Bob Corker, who couldn’t get re-elected in the Great State of Tennessee, will now fight Tax Cuts,” he tweeted.

Mr Corker then dismissed the president’s lunch with Republican senators as a “photo-op” as he urged the White House not to interfere in the discussions on tax reform.

“Hopefully, the White House will step aside and let that occur in a normal process,” the Tennessee Republican told NBC’s Today programme. “That’s the best way for us to have success.”

Reports after the lunch claimed that the public spat between the two men was not discussed during the meeting, which instead focused on tax reform and the need for Democrats to help pass the Republican agenda.

But some Republicans are growing frustrated with Mr Trump’s public comments on the ongoing tax negotiations, after the US president on Monday announced on Twitter that he would oppose any attempt to reduce the amount of income middle-class Americans could save in the popular 401(k) retirement accounts.

Such a proposal was one of a number of changes under consideration by Republican politicians as they try to compensate for the estimated $1.5 trillion in tax cuts over the next decade envisioned in the tax reform plan.

Speaking on Tuesday, House speaker Paul Ryan tried to play down the tensions between the US president and Mr Corker. He suggested that the House of Representatives may produce a tax plan before the Thanksgiving recess towards the end of November, though the senate would take more time. He urged both men to put their differences aside.

“Put this Twitter dispute aside. The fact is we have an historic chance of fixing this tax code,” Mr Ryan said, adding that he believed that Mr Corker is “going to vote for tax reform”.

But Mr Corker’s comments – and Mr Flake’s extraordinary speech – are likely to put pressure on Mr Ryan to heal divisions within the Republican Party.

Earlier in the day, Mr Trump said he believed the tax overhaul would help bring in $4 trillion in foreign profits. “It’s going to bring back, I would say, $4 trillion back into this country,” he said at an event in the White House, referring to his plan to encourage foreign companies holding profits overseas to repatriate those profits through a tax incentive.

US multinationals are holding trillions of dollars in profits offshore to avoid paying the 35 per cent corporate tax rate that would be levied if those profits were repatriated to the US.

In addition, the Trump administration is pushing for a broader cut in the corporate tax rate from 35 per cent to 20 per cent.