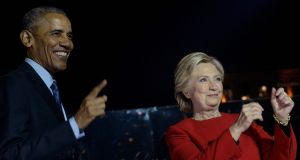 House Republicans have launched new investigations into the Obama administration and Hillary Clinton’s emails, prompting accusations from Democrats who said the moves were meant as a “massive diversion” from investigations into potential collusion between the Trump campaign and Russia.

The announcements of the investigations by three Republican committees came as two witnesses close to US president Donald Trump faced tough questions before the House intelligence panel behind closed doors as part its Russia investigation. .

Mr Trump’s personal lawyer, Michael Cohen, and his former campaign digital and data director, Brad Parscale, were both interviewed by the House panel behind closed doors on Tuesday.

Mr Cohen’s interview started in the morning and lasted around six hours, while Mr Parscale’s lasted most of the afternoon.

Mr Cohen, a former executive with the Trump Organisation who had been subpoenaed by the House panel earlier this year, was in talks to build a Trump Tower in Moscow, but ended those negotiations as Trump’s White House bid caught fire. In a statement to the Senate intelligence committee in August, Mr Cohen said the proposal was “solely a real estate deal and nothing more”.

One of the politicians said Mr Parscale “categorically denied” he was involved in any collusion with Russia, repeating earlier public statements. Politicians have been investigating whether Russian efforts to influence social media in the US were in any way connected to Mr Trump’s campaign.

As Mr Cohen spoke to investigators, House Intelligence Committee chairman Devin Nunes held a news conference outside the room to announce a separate committee investigation into an Obama-era uranium deal.

Mr Nunes earlier this year stepped back from the committee’s investigation into Russian election interference after criticism that he was too close to the White House. But he has continued to be involved with some aspects of it, including signing subpoenas.

California representative Adam Schiff, the top Democrat on the intelligence panel, said the investigations show Republicans’ “fundamental lack of seriousness” about Russian interference in the 2016 campaign.

“Acting on the urging of the president who has repeatedly denied the intelligence agencies’ conclusions regarding Russian involvement in our election, they are designed to distract attention and pursue the president’s preferred goal — attacking Mrs Clinton and Mr Obama,” Mr Schiff said.

Representative Mike Conaway of Texas, the Republican who took over the Russia investigation after Mr Nunes stepped back, said the uranium investigation will not be a distraction. “I’m not involved,” he said.

Mr Nunes and other Republicans who announced the investigation said they want to know more about whether Obama’s Department of Justice was investigating the purchase of American uranium mines by a Russian-backed company in 2010.

The agreement was reached while Hillary Clinton led the State Department and some investors in the company had relationships with former president Bill Clinton and donated large sums to the Clinton Foundation.

While Democrats have dismissed the issue, which was also brought up during the campaign, as widely debunked, Mr Trump has called it “the real Russia story.”

The White House praised Mr Nunes’s move, with spokeswoman Sarah Huckabee Sanders saying the investigation is a “move in the right direction, and something that we’ve spoken about several times here — that if there was any collusion whatsoever during the campaigns of any point — or any collusion at any point with another country, that they should look at the Clintons”.

Democrats on the House Judiciary and Oversight panels also criticised the new investigations, saying in a joint statement that another round of Clinton email investigations are a “massive diversion to distract from the lack of Republican oversight of the Trump administration and the national security threat that Russia poses”. –AP

1 One hundred Irish retailers for all your online Christmas shopping
2 Covid-19: Backlog forces HSE to skip calls to thousands of close contacts
3 People who throw house parties can be fined €1,000 and jailed for up to a month under planned law
4 School ordered to reopen after closing due to Covid-19 fears
5 Minister urges objectors to Cork flood relief plan to stop legal action
Real news has value SUBSCRIBE