Actor makes gift to The Sentry, a group working to uncover corruption in Africa 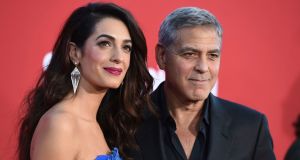 George Clooney has donated $1 million (€850,000) to tackle war crime and corruption in Africa.

The Clooney Foundation for Justice announced the gift to The Sentry, an investigative initiative Clooney co-founded to uncover the financial networks behind conflicts in Africa.

In a statement, Clooney said the group’s focus is “to make sure war crimes don’t pay”.

The Sentry said the money will help fund reports in the coming year on “state looting and illicit financial flows out of the war-torn countries of South Sudan, Sudan, Congo, Somalia and the Central African Republic”.

The dossiers will be given to banks and governments to lay the foundation for regulatory and legal action with the aim of prosecuting or seizing the assets of those who finance and benefit from genocide or other war crimes.

Announcing his gift, Clooney said: “Our focus is to make sure that war crimes don’t pay.

“We want to make it more difficult for those willing to kill en masse to secure their political and economic objectives.

“When we’re able to go after the warlords’ wallets and bankrupt those who choose the bullet over the ballot, suddenly the incentives are for peace, not war; transparency, not corruption.”

Mr Prendergast added: “The Sentry is pursuing a new strategy to counter mass atrocities that would utilise the tools of financial pressure normally reserved for countering terrorism, organised crime and nuclear proliferation.

“We aim to undermine the pillars of the war economy and disrupt the financial flows that fuel conflict. Unless the links between conflict and corruption are confronted, peace will remain a distant dream.” - PA