Former US president George H W Bush has apologised through a spokesman following allegations by actor Heather Lind that he groped her as they posed for photographs together in 2014. Video: Reuters 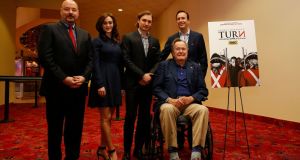 Former US president George H W Bush has reportedly apologised after an actor accused him of sexual assault.

Heather Lind (34) alleged the former US leader “sexually assaulted” her when they posed for a photograph several years ago, according to a since deleted Instagram post.

“He touched me from behind from his wheelchair with his wife Barbara Bush by his side. He told me a dirty joke,” she posted, according to the MailOnline.

A spokesman for the former president has told the MailOnline: “President Bush would never — under any circumstance — intentionally cause anyone distress, and he most sincerely apologises if his attempt at humour offended Ms Lind.”

In the Instagram post, Lind, who has starred in AMC’s Turn: Washington’s Spies, said the president touched her a second time and “Barbara rolled her eyes as if to say ‘not again’.”

“His security guard told me I shouldn’t have stood next to him for the photo,” added Lind.