Trump gives strongest warning he may take action in Syria 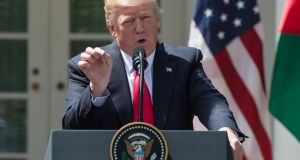 US president Donald Trump speaking at a press conference in the Rose Garden at the White House in Washington, DC. Photograph: Nicholas Kamm/AFP/Getty Images

US president Donald Trump gave his strongest warning yet that he is prepared to take action in Syria as he said that “many many lines” had been crossed by this week’s chemical attack in the war-ravaged country.

In an intervention that could signal a potential turning point in Mr Trump’s foreign policy, the president said his attitude towards Syrian leader Bashar al-Assad had changed following the attack.

“It crossed a lot of lines for me. When you kill innocent children, innocent babies...that crosses many many lines, not just a red line,” the president said during a press conference alongside King Abdullah of Jordan at the White House, describing the acts as an “affront against humanity”.

“These heinous actions by the Assad regime cannot be tolerated.”

While the president has previously indicated his opposition to further intervention in Syria, signalling as late as last week that the removal of Mr Assad was no longer a US demand, Mr Trump said the situation in Syria was now his responsibility as president.

“I like to see myself as a very flexible person. I do change, and I am flexible, and I am proud of that flexibility. That attack on children had a big impact on me.”

Footage which emerged from Khan Sheikhoun in the Idlib province of Syria on Tuesday showing civilians choking from chemical gas has been shown on TV networks across the US, reigniting the debate about intervention in the region.

Former president Barack Obama chose not to intervene in Syria after a chemical attack in 2013 despite previously stating that the use of chemical weapons was a red-line issue for the US.

Despite his strong denunciation of the Assad regime, Mr Trump declined to specify what action he might take in response to the attacks, simply replying “you will see” when pressed by journalists, prompting immediate questions as to whether his talk will be followed by actions.

The president’s strong words chimed with an earlier intervention at an emergency session of the United Nations Security Council by the US ambassador to the UN Nikki Haley.

Holding pictures of dead children from this week’s chemical attacks, Ms Haley launched a blistering attack on the actions of the Assad regime and of Russia in particular, warning the US may be “compelled to take our own action”.

Her criticism of Russia diverged from Mr Trump, who did not mention Russia in his comments on Syria. Russia intervened in the Syrian conflict on the side of the Assad regime in September 2015, with the US backing moderate rebels. Mr Trump previously indicated he would be prepared to work with Russia to fight the Isis threat.

Further speculation about a possible shift in the Trump administration’s foreign policy arose this week following the news that chief strategist Steve Bannon has been removed from his position on the National Security Council. The former Breitbart news executive was controversially given a seat at the council in January, prompting criticism that the body was becoming politicised.

Foreign policy issues are set to continue to dominate the agenda on Thursday when Mr Trump hosts Chinese premier Xi Jinping at his Mar-a-Lago estate in Florida. The president is likely to push China for more help on tackling the North Korean nuclear threat amid fears in Washington that Pyongyang may be developing missiles that could reach America.