China, the EU and the Middle East all on president’s radar 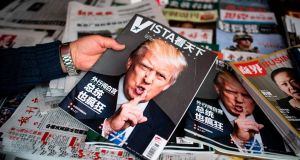 A woman holds a Chinese newspaper with a picture of US president Donald Trump at a news stand in Shanghai. Photograph: Getty 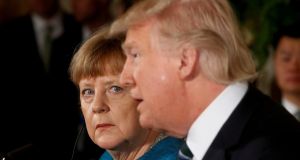 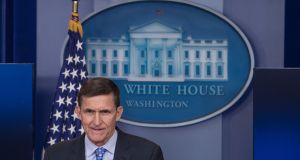 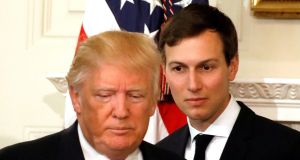 US president Donald Trump and his senior adviser Jared Kushner 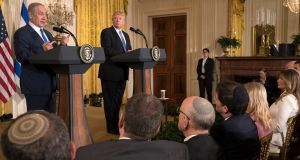 China has the potential to be the most difficult foreign policy relationship of Donald Trump’s presidency given Trump’s previous comments about the world’s second-largest economy. China-bashing was a constant Trump refrain during the presidential campaign, as he linked China’s emergence as a global economic power with America’s manufacturing demise.

He also raised tensions with China in his first days as president when he appeared to question the “One China” policy after a phonecall with the Taiwanese leader. He has since clarified his stance. Similarly, he has rowed back from some of his previous tough rhetoric.

Threats to brand China a currency manipulator on his first day in office did not materialise. Trump has also yet to announce any policy shift on trade, apart from US withdrawal from the Trans Pacific Partnership (TPP), a policy that will ironically be welcomed by China given that the trade deal was designed to cushion America from the economic might of China.

Thursday and Friday’s meeting is expected to be a “first step towards building constructive and results-orientated relations”, a White House official said ahead of the Mar-a-Lago meeting. No major decisions on trade are expected. Instead, foreign policy and China’s role in taming North Korea will top the discussion with Washington pushing for Beijing to use its economic leverage over Pyongnang.

Trump’s election as leader of the free world alarmed many in the European community last year. Trump was a critic of the EU during the campaign and a strong supporter of Brexit, predicting that other countries would leave the bloc. Ukip founder Nigel Farage was one of the first European politicians to meet Trump following his victory. In January, Trump accused the EU of being a “vehicle for Germany”.

“You look at the European Union and it’s Germany. Basically a vehicle for Germany. That’s why I thought the UK was so smart in getting out.”

Since then, Trump has tempered his views, describing the EU as “wonderful” and being “totally in favour of it.” While his apparent refusal to shake Angela Merkel’s hand during his meeting with the German chancellor in March suggested a new low in transatlantic relations, officials reported a relatively productive meeting.

Trump is due to attend the G20 summit in Germany later this year. Tensions between the US and European countries over Nato persist with Trump reiterating previous calls from US presidents for Europe to spend more on defence. Meanwhile, the EU has threatened to block Trump’s presumed nominee to become the next US ambassador to Brussels.

Trump’s connections with Russia have dogged the US president since assuming office and are now the subject of two congressional inquiries and an FBI investigation. Trump’s stated admiration for Russia president Putin during the electoral campaign marked a new departure for a would-be president. One of Trump’s most senior officials, national security adviser Mike Flynn, was forced to resign after 24 days in the job after it was revealed that he had failed to inform vice-president Mike Pence about the contents of a phonecall with the Russian ambassador to the US. Flynn has since offered to testify at the Senate Intelligence Committee inquiry in exchange for immunity.

The FBI has confirmed that an investigation into connections between the Trump campaign and the Kremlin has been ongoing since July. Trump’s son-in-law Jared Kushner has also offered to testify following revelations that he met with a Russian state owned bank late last year. His relationship with Russia may get his first test over the latest chemical attack in war-torn Syria, with Russia and the US at odds about the circumstances surrounding the attack.

Syria and the Middle East

Like much of Trump’s emerging policy, his stance towards the Middle East has been equivocal. While he campaigned in part on a pledge to withdraw America from wars in far-flung corners of the globe, he has also promised to step up the fight against Islamic State.

This week’s chemical attack on Syria presents Trump with one of his first foreign policy challenges. Just last week the Trump administration said that removing Bashar Al-Assad from Syria was not a priority – a significant shift in US policy. On Tuesday, the White House issued a statement condemning the chemical attack, blaming it on the Syrian leader. Trump also blamed his predecessor’s “weakness and irresolution” in not intervening in Syria despite previously deeming a chemical attack to be a red line. However, tweets from 2013 show that Trump himself warned against intervening in Syria.

In terms of the wider region, Trump has not so far followed through on his threats to withdraw from the Iran nuclear deal. On Iraq, son-in-law Kushner became the first senior White House administration official to visit the country this week. Trump had raised the ire of Iraqis by including Iraq in his original travel ban, despite US forces fighting alongside the Iraq army against Isis in the region.

There have also been mixed signals towards other countries in the region. In a shift in US policy, Trump invited Egyptian president Abdel Fattah el-Sisi, who seized power four years ago in Cairo, to the White House this week where he praised him for doing a “fantastic job in a very difficult situation”.

During the presidential campaign, Trump delivered some incendiary comments on the Israeli-Palestinian conflict which caused alarm among Palestinians but were welcomed by many Israelis. Among his most controversial campaign promises was to move the Israeli embassy from Tel Aviv to Jerusalem.

In February, following a meeting with Israeli prime minister Benjamin Netanyahu, Trump appeared to confirm a major shift in US policy towards Israel, suggesting that the United States would no longer insist on a two-state solution. “I’m looking at a two-state and a one-state solution, and I like the one that both parties like,” he said.

However, since then, Trump appears to have tempered many of his more controversial policy promises on Israel. Talk of moving the US embassy has ceased while he also criticised Israel for building new settlements in the occupied territories this year. If anything, Trump is likely to want to move away from US involvement in the middle east peace process, reflecting his transactional approach to foreign policy.

Son-in-law Kushner, a practising Jew, is playing a key role in the administration’s policy on the Middle East including a move to involve other players in the region in a peace process. Jordan’s role in finding a solution to the conflict, for example, dominated discussion between Jordan’s King Adbullah III and Trump in the White House on Wednesday.