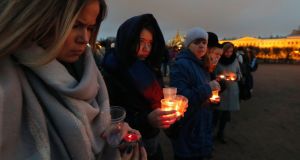 People pay tribute to the victims of a subway explosion in the Marsovo Field in St Petersburg. Photograph: Anatoly Maltsev

Investigators rounded up the suspects, from the Central Asian region of the former Soviet Union, but found no immediate evidence of their involvement in the subway attack.

Russia’s Investigative Committee has not caught any associates of 22-year-old Akbarzhon Dzhalilov, a native of Kyrgyzstan.

The committee said it is looking into the possibility that Dzhalilov could have been linked to the militant group.

The impoverished, predominantly Muslim countries in Central Asia are seen as fertile ground for Islamic extremists, and thousands of their residents are believed to have joined Isis in Syria and Iraq.

Meeting with the heads of security services from a regional alliance that includes most of Russia’s Central Asian neighbours, Russian president Vladimir Putin warned that terror threats still loom over the region.

“We see that, unfortunately, the situation is not improving,” Mr Putin said. “The recent tragic events in St Petersburg are the best confirmation of this. We know that each of our countries, practically every one, is a possible and potential target of terrorist attacks.”

In Wednesday’s sweep in St Petersburg, law enforcement agencies arrested seven Central Asian migrants who are suspected of acting as recruiters for Isis and al-Qaeda’s branch in Syria.

The detainees were accused of seeking “mostly immigrants from the republics of Central Asia to commit crimes of a terrorist nature and encourage them to get involved in the activities of terrorist organisations”, the Investigative Committee said.

Investigators were still checking their contacts, it added, but noted that, as of now, “there is no information about any links between the detainees and the perpetrator of the terror attack”.

The investigators have also searched Dzhalilov’s home and found objects similar to those used in the subway bomb, it said.

CCTV footage from outside his apartment building showed him leave home with a bag and a backpack on Monday. The explosion on a train running along a busy north-south subway line killed the attacker and 13 other people. Another 55 remain in hospital, and several of them are in critical condition, according to the Russian Health Ministry. – (AP)