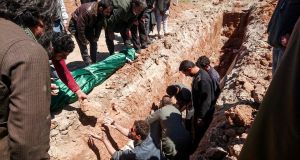 Syrians dig a grave to bury the bodies of victims of a a suspected toxic gas attack in Khan Sheikhoun, Idlib province, Syria, on Wednesday. Photograph: Fadi Al-Halabi/AFP/Getty Images

Arriving at the bomb site nearly two hours after planes had struck, Mohammed al-Dagheem had no idea he could still be in danger.

“There was a smell – maybe like some kind of fuel,” he recalls. “Then an ambulance rushed towards us and the rescuers shouted at us to move away from there, there were 50 or 60 people found dead from the gas.”

He had brought plastic gloves and masks and thought he was prepared for the aftermath of the attack on the rebel-held town of Khan Sheikhoun in Idlib province.

But his colleague quickly became so dizzy he had to get someone else to drive and as soon as they reached the local clinic, Dagheem, his colleagues and three rescue workers were sprayed down with water in a desperate attempt to remove traces of the gas. He struggled to breathe and felt a stinging in his eyes – a day later, the pain is worse, he says, and his sight is blurred.

Several hundred people were wounded and 72 people killed in the attack on Khan Sheikhoun, 20 of them children, according to activists. It is not yet clear what substance was used.

Dagheem saw victims stripped of their clothes, foaming at the mouth, barely able to move. Small children, with no signs of injuries, lay pale and lifeless. The few families that managed to reach underground shelters were all killed, activists said. “We are used to chlorine attacks – people have trouble breathing, they get sick, but they don’t usually die. Syria had signed the chemical weapons pact [in 2013]. I never expected this kind of criminality again,” Dagheem says.

The Syrian government denies western government accusations that the suspected use of warplanes indicates Damascus was behind the strikes. Syrian military officials, and international backer Russia, argue they hit a rebel chemical weapons stockpile and that the militants themselves are to blame. The UN has called for an international investigation into the incident, likely the biggest since Syria signed the chemical weapons pact four years ago.

In 2013, up to 1,400 people are thought to have died in a suspected sarin gas strike, the largest since the 1988 Halabja attack in Iraq. Shortly afterwards, President Bashar al-Assad’s government joined the International Chemical Weapons Convention to avoid US strikes – then President Barack Obama had called the use of chemical weapons a red line – and the Syrian government agreed to remove 1,300 tonnes of chemical agents from the country.

Since then, monitors have accused the government and the jihadi group Isis of using chlorine in Syria. Its use as a weapon is illegal but because of its widespread commercial use, chlorine is not banned under the Chemical Weapons Convention. Some reports by the Organisation for the Prohibition of Chemical Weapons have since indicated that traces of nerve agents sarin and VX may still be in the country.

Syrian opposition figures warn this is proof Obama’s chemical weapons deal was a failure. Others argue that comments by US President Donald Trump’s administration, distancing themselves from calls for Assad’s removal, have emboldened Damascus.

In recent months, Assad is seen as having gained a substantial military advantage. He has recaptured many rebel-held areas and pushed opposition supporters north into Idlib, which faces escalating air strikes.

“It seems like the world has just agreed to allow us to be exterminated,” says Idlib opposition activist Tareq Abdelhaq. “Here we are, back to chemical weapons again.”

The attack took place a day before a EU conference in Brussels at which foreign ministers, the UN and civil society groups met to discuss the Syrian conflict and the country’s reconstruction.

Staffan de Mistura, the UN special envoy for Syria, suggested the timing was not coincidence, a “pattern” was emerging.

“Every time we have a conference or a meeting or something that can give some hope or some perception of hope about the future of Syria, there is a temptation by some, through horrific acts, to kidnap the event, divert it to send some form of cruel statement, not so much to us, but to the people of Syria,” he said.

The nightmarish scenes emerging from Khan Sheikhoun certainly suggest the chemical weapons threat still hangs over those struggling to survive the six-year civil war, in which an estimated 400,000 people have been killed and many more displaced.

The international medical group Médecins Sans Frontières said its staff has treated patients sent across the border to Turkey, and that their symptoms were consistent with exposure to neurotoxic substances such as sarin. In a statement, the group added that some of the patients treated also smelled of bleach, suggesting that some were exposed to chlorine as well.

“It was a bloodless massacre,” says activist Mohammed al-Ali, who is from the town. “I still can’t absorb what I saw.”

Local medics and residents have hurriedly set up online chat rooms to exchange lists of the dead and the wounded, and their location. The minimal services in the war-torn region meant victims were sent all over Idlib.

“I watched one man looking for his brother run from clinic to clinic, then search the 40 corpses gathered at one site, every single one.” Ali says. “He was so desperate.”

Most victims have been identified, he says, but they are struggling to identify the bodies of those they believe are displaced people recently arrived in Idlib.

One Syrian man, who happened to be driving through Khan Sheikhoun after the attack, says he stopped to help panicked locals clearing the wounded away.

“I found a woman no one seemed to know. I took her ID and a bag of money she had, I didn’t want anyone to steal it,” he said. “I have been sending messages to everyone I know, every chatroom, to contact me. I hope her family finds her.”