Analysis: The horrific Khan Sheikhoun bombing is likely to harden attitudes on both sides 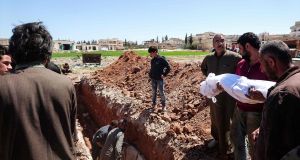 The horrific air strike on the town of Khan Sheikhoun in Syria’s rebel- and jihadi-held northwestern province of Idlib could derail negotiations on the ceasefire and a political settlement of the six-year Syrian conflict.

While western powers accuse the government of using banned chemical weapons, Damascus and its ally Moscow claim the Syrian air force bombed a facility where such weapons were being produced and stored by armed opposition groups.

During the third round of talks in Geneva the government and opposition agreed to the agenda of the talks.

At the beginning of the fourth round, al-Qaeda-linked Jabhat Fatah al-Sham (formerly Jabhat al-Nusra) suicide bombers struck Syrian military intelligence headquarters in Homs, killing dozens of officers and wounding 50 civilians. Nevertheless, during that round, ending on March 3rd, de Mistura said both sides discussed and put forward ideas on the four agenda items – a transitional government, a new constitution, elections and combatting terrorism.

De Mistura has appealed to Syrians and the international community to “make use of these horror moments to show [spoilers] cannot prevail”. He said he and his team see ceasefire talks at the Kazakh capital Astana, political negotiations at Geneva, the fundraising meeting in Brussels, and further sessions in Astana and Geneva as “stepping stones” toward a political solution.

The Khan Sheikhoun bombing could harden attitudes on both sides. Strengthened on the ground following its reassertion of control over eastern Aleppo, Palmyra and territory west of Damascus, the government could be less prepared to make concessions on the shape of a transitional regime or discuss the future of President Bashar al-Assad.

Damascus had also been bolstered by statements by the Trump administration which had given priority to defeating Islamic State (also known as Isis) over ousting Assad. US and European condemnation of his government over Tuesday’s attack could increase Damascus’s feelings of vulnerability, stiffen its resolve to resist pressure to negotiate, and prompt a return to the military solution.

The Saudi-sponsored Higher Negotiations Committee (HNC) said the bombing had thrown into doubt further talks. The HNC has always insisted Assad must step down before the beginning of a political transition, a stand rejected by Damascus, Moscow and Tehran.

The attack makes it difficult for two other opposition groups – the Cairo and Moscow platforms – to argue Assad’s fate should be decided in elections held after the transition period and the adoption of a new constitution. The attack widens the gulf between the HNC and these two groups, which De Mistura had been pressing to form a single delegation.

If talks proposed for Astana and Geneva are postponed, De Mistura, whose term as mediator has expired, may no longer be in charge and a new team may have to be formed, extending the delay and endangering the fragile ceasefire.