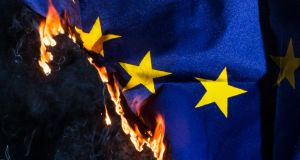 On this week’s World View podcast, as British prime minister Theresa May prepares to trigger article 50 on Wednesday, thereby kick-starting the Brexit divorce proceedings, London Editor Denis Staunton reports from London on what happens next and how ready both the UK and EU are for these marathon talks.

Chief EU Brexit negotiator Michel Barnier issued a warning this week about the colossal “bar bill” Britain must agree to pay to the bloc before any negotiations on their future relationship can be held.

The issue remains outstanding, but there is some evidence of attempts to wind down tensions as both sides prepare for talks.

From the US, Washington Correspondent Suzanne Lynch has the latest on the spectacular failure of Paul Ryan to get Republicans on board with President Donald Trump’s healthcare reform.

Mr Ryan’s position is safe for the moment, but the fiasco has caused serious damage to the credibility of the Speaker of the House of Representatives, she says.