Trump firm ordered to turn over documents for Russia inquiry 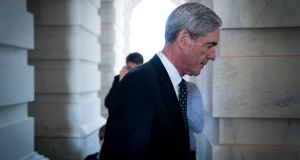 The US special counsel, Robert Mueller, has subpoenaed the Trump Organisation to turn over documents, including some related to Russia, according to two people briefed on the matter.

The order is the first known time that the special counsel demanded documents directly related to President Donald Trump’s businesses, bringing the investigation closer to the president.

The breadth of the subpoena was not clear, nor was it clear why Mr Mueller issued it instead of simply asking for the documents from the company, an umbrella organisation that oversees Mr Trump’s business ventures. In the subpoena, delivered in recent weeks, Mr Mueller ordered the Trump Organisation to hand over all documents related to Russia and other topics he is investigating.

The subpoena is the latest indication that the investigation, which Mr Trump’s lawyers once regularly assured him would be completed by now, will drag on for at least several more months.

Word of the subpoena comes as Mr Mueller appears to be broadening his investigation to examine the role foreign money may have played in funding Mr Trump’s political activities.

Neither White House officials nor Alan Futerfas, a lawyer representing the Trump Organisation, immediately responded to requests for comment.

The Trump Organisation has typically complied with requests from congressional investigators for documents for their own inquiries into Russian election interference.

The Trump Organisation has said that it never had property holdings in Russia, but witnesses recently interviewed by Mr Mueller have been asked about a possible property deal in Moscow.

In 2015, a long-time business associate of Mr Trump’s emailed Mr Trump’s lawyer, Michael Cohen, at his Trump Organisation account claiming he had ties to President Vladimir Putin of Russia and said that building a Trump Tower in Moscow would help Mr Trump’s presidential campaign. Mr Trump signed a nonbinding “letter of intent” for the project in 2015 and discussed it three times with Mr Cohen.

Mr Mueller could run afoul of a line the president has warned him not to cross. Though it is not clear how much of the subpoena is related to Mr Trump’s business beyond ties to Russia, Mr Trump said in an interview with the New York Times in July that the special counsel would be crossing a “red line” if he looked into his family’s finances beyond any relationship with Russia. – New York Times