Myanmar willing to take fewer than 400 of 8,000 Rohingya listed 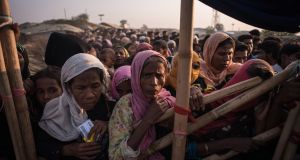 Myanmar has said it is willing to take back fewer than 400 Rohingya refugees of the 8,000 who have said they would voluntarily return from Bangladesh.

U Myint Thu, Myanmar’s permanent secretary for foreign affairs, said that of the list of thousands of returnees submitted by the Bangladesh government, they had deemed only 374 eligible for repatriation.

Myanmar blamed Bangladesh for the slow process, accusing its neighbour of submitting missing or “incomplete” information for the majority of the refugees, and accused three on the list of being terrorists.

“These 374 will be the first batch of the repatriation,” said Myint Thu at a press conference in the capital Naypidaw. He did not give a timeline for the return, but simply said: “They can come back when it’s convenient for them.”

The move towards repatriation will barely make a dent in the 700,000 Muslim Rohingya refugees currently living in camps in Bangladesh after fleeing a violent and targeted campaign by the Burmese military in Rakhine state, which began in August 2017 and destroyed their homes and left thousands dead.

Even if Myanmar finally allows a process of repatriation to begin, after two stalled efforts in December and January, there are still concerns over the safety of the Rohingya and the conditions they will be returned to.

Satellite imagery in a report by Amnesty International on Monday showed how most Rohinga villages have been bulldozed, with large concrete structures and military bases being built in their place.

The Myanmar government said the 374 repatriated refugees would be placed in the temporary housing camps they have built – which Human Rights Watch described as “open air prisons” – for no longer than a month and would then be allowed to return to either their original villages, or close by.

It is unclear whether the 8,000 who have said they will voluntarily return are Rohingya who fled the most recent campaign of ethnic cleansing in 2017, or those who came to Bangladesh during earlier rounds of violence in 2012 and 2016.

Abul Kalam, Bangladesh’s refugee relief and rehabilitation commissioner, said that despite the small number Myanmar had accepted, “we are still expecting them to take back all of the Rakhine population that are in Bangladesh”.

Mr Kalam said he had not received confirmation from the Burmese government over the latest development, but said that in the earlier meetings between Bangladesh and Myanmar, the proposed figure was that Myanmar would accept 300 Rohingya refugees every day.

“There are still safety issues and we are not exactly sure where these people will be taken to,” he said, of the 374 who have been approved for return to Myanmar. “The understanding between the two parties was that checks would be made for their safety before any people went back.”

The Myanmar government also used the press conference on Wednesday to reiterate their denial that genocide and ethnic cleansing had occurred in Rakhine, following forthright condemnation by UN figures on Tuesday that genocide and “crimes under international law” had been committed in Rakhine.

Investigators described to the human rights council a campaign of violence that included brutal gang rapes, indiscriminate shooting, burning elderly and disabled people alive in their homes, sexual violence against women and the killing of babies and children.

But U Aung Hla Tun, deputy minister of information, said hundreds of thousands of Rohingya had actually been enticed to leave by the prospect of a “better livelihood at the camps in Bangladesh”.

Aung Tun Thet, who has been appointed by Myanmar to oversee the rehabilitation in Rakhine added: “Accusations are very easy to make, but we are not involved in anything at all.” – Guardian