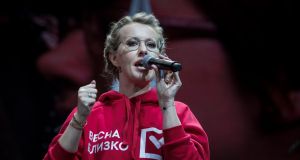 Perhaps because she’s a glamorous blonde or because her late father was a friend of Vladimir Putin, many Russians have not taken Kseniya Sobchak’s bid for the presidency seriously.

But as she wound up her election campaign on Thursday, the TV celebrity and opposition activist faced down her belittlers, unveiling a new liberal Party for Change to take her campaign forward for a better Russia.

All of the seven politicians running against Putin in this Sunday’s election know the Russian president’s position is, at least for now, unassailable and that their main function in the Kremlin’s eyes is to provide a veneer of competition to the race.

Sobchak has faced a barrage of insults from rival candidates as she presents her “Against All” protest manifesto in TV debates, not to mention a stream of often obscene abuse on Russian social networks.

But the harshest criticism has come from the hugely popular Russian opposition leader and anti-corruption crusader Alexei Navalny, who has been campaigning for a nationwide election boycott since being barred from the ballot late last year.

Sobchak knows that Putin has less to fear from her than from Navalny, who has pledged to drive the president from office and put all his corrupt cronies on trial. But she has denied his accusations that she is a “perfect, fake liberal candidate” dancing to the Kremlin’s tune.

To her credit, Sobchak adopted a bold agenda in her presidential campaign, warning that Russia’s 2014 annexation of Crimea – the central plank of Putin’s popularity – had condemned the country to economic ruin. She has also raised eyebrows on openly discussed topics that are traditionally taboo in Russian politics, arguing the case for LGBT rights and gender equality and for curbs on the Russian Orthodox Church’s interference in policymaking.

Being outrageous has been one of Sobchak’s defining features throughout her professional life . After taking a degree in political science at Moscow State University, she went into television making her name – and a lot of money – as the host of the raunchy Dom 2 reality show and Blonde in Chocolate, where in one particularly scandalous episode, she appeared in a bubble bath. Rich, famous and fabulous, she became the darling of Moscow’s fast-living social scene and of the tabloid press captivated by her revealing outfits and string of boyfriends.

It was to be expected that Sobchak’s political enemies would take advantage of her colourful past to undermine her bid for the presidency. “Nobody will take Sobchak seriously,” said Vitaly Milonov, a Russian lawmaker renowned for his homophobic views. “Until recently the presidential candidate was dancing a shameful can-can with her skirt rolled up at cocaine evenings in Moscow . . . Now she considers herself a candidate for president – the highest state position in the land.”

However, long before she took to the party scene, Sobchak had gained inside experience of life in the dark world of Russian politics. In 1991, when she was just 11, her father, Anatoly Sobchak, was elected mayor of Saint Petersburg, becoming a driving force in the reform movement that emerged after the Soviet Union’s collapse. Mr Sobchak, who had years earlier taught Putin in law school, gave the former KGB officer his first break in politics, appointing him as his deputy. Putin returned the favour when his mentor fell under suspicion for corruption and helped him flee Russia.

The story of Sobchak’s death from an apparent heart attack in 2000 is somewhat murky. Unsubstantiated rumours crop up every now and then that Putin, who had recently been elected Russian president for the first time, might have played some part in his demise.

Pressed by reporters to shed light on the matter during the election campaign, Sobchak has vigorously defended Putin’s reputation, insisting he worshipped her father and had been visibly overwhelmed by grief when he joined the family at his former boss’s funeral. “You’d have to be Leonardo DiCaprio to fake tears like those,” she told Echo Moskvy radio last week.

Perhaps because of their personal history, Sobchak avoided criticising Putin in public for the first decade of his rule. Something changed in 2011 when she joined the group of opposition activists leading massive street protests that erupted in Moscow after a flawed parliamentary election.

In the political crackdown that followed, masked police raided Sobchak’s Moscow apartment, confiscating more than €1.3 million worth of cash. Banished from Russian state television, she became a presenter at Dozhd, an independent TV station and leading platform for Russian liberals.

Whether Sobchak has played her election campaign with a free hand or not, it is unthinkable in the system of “managed democracy” that Putin has built that she obtained a slot on the presidential ballot without official approval.

In weighing the risks, the election planners may have calculated that Sobchak would struggle to win votes in patriarchal Russia. More than half of respondents to a survey conducted last year by the Levada Centre, an independent Russian pollster, said they did not want a woman for president. Some 30 per cent said women should stay out of politics altogether.

‘Fool and a whore’

The Kremlin could also be confident that the feisty, photogenic TV celebrity would inject some much-needed life into an otherwise dull, predictable election campaign. What Russian audiences will likely remember best from the political TV debates aired over the past few weeks is the moment when Sobchak emptied a glass of water over Vladimir Zhirinovsky, the bombastic leader of the nationalistic Liberal Democratic Party of Russia who had lambasted her as a “fool and a whore”.

But Sobchak’s paramount attraction as a candidate was that she would deepen the existing rift in the Russian opposition and weaken Alexei Navalny, Putin’s most dangerous political foe.

“Until Sobchak [entered the presidential race], Alexei Navalny was the only competitor to Putin,” Alexander Baunov, a senior fellow at the Carnegie Moscow Centre, wrote this week. “Now he has become a competitor to Sobchak.”

When Sobchak announced her candidacy she appeared to be seeking reconciliation with Navalny, promising to step aside if the authorities had a change of heart and allowed him to run in the election.

But her patience with her former opposition colleague has worn thin. “Navalny does not want to share his popularity,” she said. “He reminds me of another politician – Putin,” she said last week.

The conflict between Sobchak and Navalny encapsulates the dilemma that divides opposition movements the world over: whether to fight for reforms from within, or take the more radical route and aim for the destruction of the whole political system.

But with the Russian opposition dividing into warring camps, she will face an immense battle to build a united front in the Party for Change.