Long-term outlook for Palestinian aid agency in doubt despite pledges 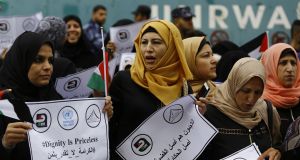 Palestinian women hold signs in Arabic reading “Refugees are the origin of the cause and the beginning of the tale”, during a demonstration outside the United Nations Relief and Works Agency (Unrwa) offices in Gaza City on Thursday. Photograph: Mohammed Abed/AFP/Getty Images

The United Nations agency that helps Palestinian refugees said on Thursday it had received new cash pledges to enable it to keep working for a few more months, but warned its long-term outlook remains in doubt.

The UN Relief and Works Agency (Unrwa) is looking to cover an estimated $446 million (€362 million) budget shortfall that was largely caused by US president Donald Trump’s abrupt decision in January to effectively freeze US aid to the Palestinians.

A donors’ conference in Rome drew promises from countries around the world of additional funds of some $100 million, leaving Unrwa with a uphill task to keep its core education, healthcare and food security services afloat.

“A very important first stop was reached today, but a long way is in front of us,” UN secretary general António Guterres told reporters after the meeting.

“If Unrwa did not exist, if its services were not provided, the security of the region would be undermined,” he added.

Washington donates about $350 million a year to Unrwa, which was founded in 1949 to aid Palestinian refugees, but so far this year has handed over $60 million. UN officials fear they might not receive any more from the US in 2018.

Mr Trump said in January the US would only give aid if the Palestinians agreed to renew peace talks with Israel. The talks have been frozen since 2014, and with no negotiations in sight, envoys from about 70 countries and organisations met in Rome to discuss the funding crisis.

Going into the meeting, Unrwa commissioner-general Pierre Krahenbuhl had warned that his organisation would run out of funds in May. The new pledges gave the agency a bit more breathing space.

“It will last us a couple of months more into the middle or beginning of the summer,” he said. “We need to be optimistic.”

Unrwa serves an estimated five million Palestinian refugees in the Israeli-occupied West Bank, in Gaza, Syria, Lebanon and Jordan. It runs 710 schools, its doctors carry out a total of 9 million consultancies a year and it feeds some 1.7 million people, mostly in the Gaza Strip. – Reuters