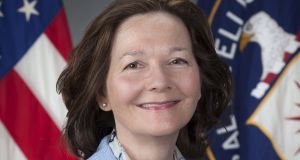 If the US Senate confirms Ms Haspel, she would be the first female director of the agency, but the historic significance of her nomination was immediately overshadowed by her reported link to the black site, where two suspected al-Qaeda members were waterboarded.

“Ms Haspel needs to explain the nature and extent of her involvement in the CIA’s interrogation program during the confirmation process,” said John McCain, the Arizona senator who was tortured during the Vietnam war. He called the torture of US detainees during the Bush era “one of the darkest chapters in American history”.

“The fact that she’s been able to stay in the agency, rise in the agency and now is in line to be director should be deeply troubling,” Larry Siems, author of the Torture Report, a book analysing government documents relating to Bush-era torture released in 2014 , told the Guardian.

Christopher Anders, deputy director of the American Civil Liberties Union’s Washington legislative office, claimed Ms Haspel “was up to her eyeballs in torture”. Mr Anders urged the CIA to declassify her torture record before the Senate considers her nomination. “Gina Haspel was a central figure in one of the most illegal and shameful chapters in modern American history,” he said in a statement.

Ms Haspel joined the CIA in 1985 and has extensive overseas experience. She was deputy director of the CIA’s National Clandestine Services and has held several other leadership roles in the agency.

“I am grateful to President Trump for the opportunity, and humbled by his confidence in me, to be nominated to be the next director of the Central Intelligence Agency,” Ms Haspel said in a statement. “If confirmed, I look forward to providing President Trump the outstanding intelligence support he has grown to expect during his first year in office.”

Ms Haspel’s alleged links to the Thai black site were scrutinised in February last year when Mr Trump appointed her to CIA deputy director, where she worked under director Mike Pompeo.

If confirmed by the Senate, Ms Haspel will take up Mr Pompeo’s post. He has been selected to take over the secretary of state job, succeeding Rex Tillerson.

Mr Pompeo said in a statement: “I am proud of the work we have done on behalf of America and know that the agency will continue to thrive under the leadership of Gina Haspel.”