Video clips shot by members of the public illustrate the immediate aftermath of the collapse of the newly erected pedestrian bridge at Florida International University. Eight vehicles were trapped in the wreckage of the 950-tonne bridge. 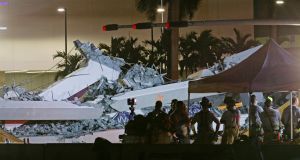 Emergency personnel with sniffer dogs searched for signs of life amid the wreckage of concrete slabs and twisted metal after the 862-tonne bridge crushed vehicles on one of the busiest roads in South Florida. At least eight vehicles were trapped in the wreckage of the bridge and at least 10 people have been transported to hospitals, officials and doctors told news conferences.

The bridge was still under construction and had been expected to open to foot traffic next year.

Witnesses told local media the vehicles were stopped at a traffic light when the bridge collapsed on top of them at around 1.30pm local time.

“We are shocked and saddened about the tragic events unfolding at the FIU-Sweetwater pedestrian bridge. At this time we are still involved in rescue efforts and gathering information,” the statement said.

“If anybody has done anything wrong, we will hold them accountable,” said Florida governor Rick Scott, at a Thursday night press conference, after his office issued statement saying a company contracted to inspect the bridge was not pre-qualified by the state.

The $14.2 million bridge crossed over a busy seven-lane highway that divided the university’s campus from the city of Sweetwater. The main part of the 53 metre span was assembled by the side of the road and had to be moved into place. The “accelerated bridge construction” method was supposed to reduce risks to workers and pedestrians and minimise traffic disruption, the university said.

“FIU is about building bridges and student safety. This project accomplishes our mission beautifully,” FIU president Mark B Rosenberg had said in the statement on Saturday.

Continuing to monitor the heartbreaking bridge collapse at FIU - so tragic. Many brave First Responders rushed in to save lives. Thank you for your courage. Praying this evening for all who are affected.

The National Transportation Safety Board sent investigators to the scene. President Donald Trump thanked first responders for their courage on Twitter. Along with governor Scott, US senator Marco Rubio went to the scene of the collapse.MCM, the Miami-based construction management firm that won the bridge contract, took its website down on Thursday. An archived version of the website featured a news release touting the project.

“This our first Design-Build with FIGG Bridge Engineers, a nationally acclaimed, award-winning firm based out of Tallahassee. FIGG has designed iconic bridges all over the country, including Boston’s famous Leonard P Zakim Bridge and Florida’s Sunshine Skyway Bridge.”

MCM said on Twitter that it was “a family business and we are all devastated and doing everything we can to assist”.

“We will conduct a full investigation to determine exactly what went wrong and will co-operate with investigators on scene in every way.”

A message left at FIGG’s office in Tallahassee was not immediately returned.

Florida International University is the second-largest university in the state, with 55,000 students. Most of its students live off-campus and they were on spring break when the collapse happened.

The bridge was supposed to be a safe way to cross a busy street and a plaza-like public space with seating where people could gather.

In August 2017, a university student was killed crossing the road that the bridge was supposed to span.

At a news conference, Juan Perez, director of the Miami-Dade Police Department, said that as soon as the search and rescue operation was over, the police homicide bureau would take the lead in investigating. He said the state attorney was also “on standby and waiting to come in and work this case with us”.

The bridge spanned over Southwest Eighth Street, a major thoroughfare that crosses the county. It had been assembled off-site and moved to the location on Saturday.

The bridge was still under construction and was not expected to open to the public until the end of the year, a university official said. “Barring somebody using it that wasn’t supposed to be there, it’s either an engineering problem or it’s a construction problem, but that’s why you bring in the professionals,” Senator Bill Nelson told CBS Miami.

He said he had spoken to the university president, Mr Rosenberg, soon after the collapse, and “you can imagine the near shock that he was almost in”.

The main span of the bridge was lifted from its temporary supports, rotated 90 degrees across several lanes of traffic and lowered into position, according to the FIU News. The distinctive-looking cable bridge was intended to address safety concerns for FIU students who walk to the campus from suburban Sweetwater, where thousands of them live. – Associated Press/New York Times/Reuters

Yemen funds for humanitarian aid fall far short of sum needed 20:00
Black and Asian people in England 50% more likely to die from Covid-19 – report 19:07
Dutch come under fire for treatment of migrant workers in meat plants 18:31
Biden accuses Trump of fanning the ‘flames of hate’ as protests continue 18:17
Coronavirus: Spain records no new deaths for second day in a row 16:57