Hopes for EU backing on Brexit transition plan ‘may be premature’ 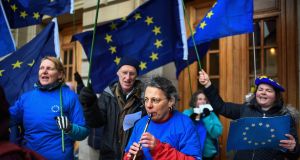 Members of the European Movement in Scotland demonstrate against Brexit outside the Scottish Labour Party Conference in Dundee in recent days. File photograph: by Jeff J Mitchell/Getty Images

UK optimism that next week’s EU summit will endorse an agreement on its Brexit transition may be premature, EU diplomatic sources have warned.

London has in the last few days been raising expectations that accelerated talks in Brussels this week and over the weekend could lead to an announcement in Brussels by Brexit secretary David Davis on Monday that differences over the draft agreement on transition have been resolved.

The UK government is particularly anxious to give an increasingly edgy business community a clear commitment to the arrangements for transition, as soon as possible – specifically on the suggested continuity of current rights and obligations over close on two years.

Were agreement reached on Monday, commission officials say, the issue could go to Brexit ministers of the 27 states meeting on Tuesday, and then to the summit on Thursday/Friday. The summit is currently only due to approve the EU’s negotiating guidelines on the future trading relationship and to hear a report from EU chief negotiator Michel Barnier on the state of play on other strands of talks.

However, sources warn that important differences on transition and the broader Withdrawal Agreement, of which the transition text is part, remain unresolved. EU negotiators have yet to see a real shift from the UK, the sources say. They add that there may also be a reluctance on the EU’s part to accede to UK wishes to separate out discussion of the transition deal from the Withdrawal Agreement, which is significantly more difficult to agree.

Among the issues still to be resolved on transition is that of its duration – the EU has suggested it should last from the end of March next year to the end of 2020, when the EU’s current budget round is completed.

The UK had spoken of a two-year transition – they talk of an “implementation period” – but Mr Davis said on Newsnight on Wednesday that he can “live with” a transition of under two years if that helps to secure an early deal.

He said the EU and UK will establish a joint committee during the transition period to guarantee a “duty of good faith” by both sides – that committee is provided for not in the transition deal, but in the wider agreement, but could help to reassure the UK in its concerns over consultation on new regulations during transition.

British protests that during transition the UK would not be allowed to talk about trade to third countries may have reflected a misunderstanding of what is being proposed, commission sources suggest.

They believe a formula can be agreed that sets out acceptable parameters for UK trade discussions.

On the wider Withdrawal Agreement, there are still important differences on the Border, with the UK negotiators insisting the treaty should include references to Paragraph 50 of the December joint accord.

That contained categorical assurances from the UK that there would be no barrier to trade between Northern Ireland and the rest of the UK.

The EU negotiators have argued that this is a commitment by the UK to its citizens, and not one implicating the EU, and thus has no place in a legal treaty between the two.