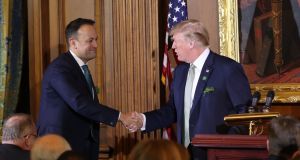 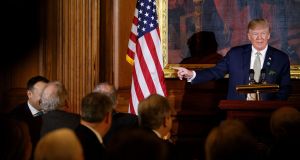 Taoiseach Leo Varadkar has revealed that he helped Donald Trump when he bought Doonbeg golf course when he was minister for tourism.

After Mr Trump opened his address at the Friends of Ireland lunch in the US Capitol, Mr Varadkar said that he received a phonecall from the businessman while he was at a rugby match in London.

The Taoiseach said “we actually had been in contact before he was president and I was Taoiseach”.

He recalled that Mr Trump raised the issue of his recent purchase in Doonbeg, Co Clare and his concerns about windfarms that were to be built in the area.

Mr Varadkar said he then rang Clare County Council. “I tried to do what I could do. The planning permission was declined.

“The president has very kindly given me credit for that. I have to say it probably would have been refused anyway.”

Labour Party Leader and spokesman for foreign affairs Brendan Howlin expressed concern the Taoiseach’s comments, saying “for the Taoiseach to be seen to meddle and intervene on planning processes at Doonbeg is entirely inappropriate”.

Green Party leader Eamon Ryan said: “This is a shocking admission from the Taoiseach, and it harks back to the very dark days in the Irish planning system, where political interference ensured that the rich and powerful got what they wanted.

“The fact that the Taoiseach so flippantly admitted his intervention today only makes matters worse.

“There is no doubt that he exercised undue influence and undermined due process with his intervention. It was and is completely inappropriate.”

However, a Government spokesman told The Irish Times that Mr Varadkar’s call to Clare County Council seeking information about the wind farm was “entirely routine” and “entirely appropriate”.

He said it was “normal politics” for a minister to seek information about a matter that was brought to his attention.

“It was raised with him and he sought a brief on it and that was the end of the matter; full stop,” he said.

The spokesman said he had “no idea” who Mr Varadkar spoke to at the council.

Earlier, Mr Trump said he would visit Ireland as early as next year.

Mr Varadkar’s unscripted comments after Mr Trump began his speech at the lunch by saying “we actually knew each other from a different life.”

Having got up to speak, the Taoiseach said: “As the president alluded to the fact... we actually had been in contact before, before the president became president and I became Taoiseach, and it happened three or four years ago when I was minister for tourism.”

He said, while in London for the rugby match, “my assistant John Carroll said that there’s a call. Donald Trump wants to speak to you. And I just thought: This can’t be the case, this has to be a piss-take by one of my staff members.

“Surely, a businessman like Donald Trump would write a letter first and we would organise a meeting but as we all know president Trump doesn’t work like that, he is a very direct man, likes to get things done. So at the other end of the phone was Donald Trump saying to me that he had bought this resort in Ireland, in Co Clare, this beautiful golf resort called Doonbeg but that there was a problem nearby, somebody was trying to build a windfarm and that of course would have an impact on tourism and the beauty of the landscape.

“So I endeavoured to do what I could do about it and I rang the county council and enquired about the planning permission and subsequently the planning permission was declined and the windfarm was never built - thus the landscape being preserved - and the president has very kindly given me credit for that, although I do think it probably would have been refused anyway.”

Mr Howlin said: “The reports from Washington today that Taoiseach Leo Varadkar has made political representations essentially on behalf of the business interests of president Trump are extraordinary.

“The Taoiseach needs to make clear immediately the nature of these representations and if president Trump or a member of his family asked the Taoiseach to make them on his behalf.

“It would not be unusual for the Taoiseach of the day to make queries or representations on behalf of another nation when it comes to Government business but planning matters surrounding Doonbeg are clearly a private business matter for president Trump.

“There are particularly sensitivities for obvious reasons around politicians making representations to planning authorities and for good reason too.

Mr Varadkar has previously referred publicly to the contact from Mr Trump over his objection to the proposed wind farm.

He told Time magazine in an interview in July 2017 that Mr Trump had “a planning issue which we were able to resolve. It was resolved by the county council rather than me but it was resolved.”

Asked whether it was normal for a private citizen to call the minister for tourism over a planning issue, the Taoiseach told the magazine that it “probably reflected his business style at the time.”

“I get the impression he is the kind of person who would just pick up the phone and want to ring the man or woman who is charge over there, rather than necessarily going through normal business or diplomatic procedures. There are pluses and minuses to that,” said Mr Varadkar.

“In many ways, I actually like that approach because you know traditional civil service and diplomatic approaches can be all about hierarchies, and sometimes the principals just need to talk and sort it out.”