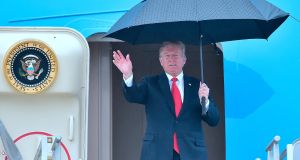 Donald Trump: has made 2,140 false or misleading claims in his first year as president, according to a Washington Post count. Photograph: AFP/Getty Images

US president Donald Trump bragged that he made up facts in a meeting with Canadian prime minister Justin Trudeau, according to an audio recording obtained by the Washington Post.

The US president - notorious for making false claims on countless issues - admitted he told Mr Trudeau the United States has a trade deficit with its neighbour when he “had no idea” if that was true.

According to the recording, Mr Trump told guests at a fundraising dinner in Missouri: “Trudeau came to see me. He’s a good guy, Justin. He said, ‘No, no, we have no trade deficit with you, we have none. Donald, please.’

“Nice guy, good-looking guy, comes in - ‘Donald we have no trade deficit.’ He’s very proud because everybody else, you know, we’re getting killed ? So he’s proud. I said, ‘Wrong Justin, you do.’ I didn’t even know ? I had no idea.

“I just said, ‘You’re wrong.’ You know why? Because we’re so stupid ? And I thought they were smart,” Mr Trump said.

Mr Trump went on: “I said, ‘You’re wrong Justin.’ He said, ‘Nope, we have no trade deficit.’ I said, ‘Well, in that case I feel differently,’ I said, ‘but I don’t believe it.’ I sent one of our guys out, his guy, my guy, they went out, I said, ‘Check because I can’t believe it.’ ‘Well, sir, you’re actually right. We have no deficit but that doesn’t include energy and timber ? And when you do, we lose $17bn a year.’ It’s incredible.”

Mr Trump and Mr Trudeau, 25 years apart in age and polar opposites in temperament, have projected warm relations so far. Last year, in honour of Canada Day, the president used Twitter to praise his “new found friend” north of the border.

Mr Trump defied critics in his own Republican party last week to announce stiff import taxes on steel and aluminium, risking a trade war with China and the European Union (EU).

His top economic adviser , Gary Cohn, quit over the tariffs, while secretary of state Rex Tillerson, who also disagreed with them, was fired earlier this week.

On Wednesday, the Post report says, the president again lambasted the EU, China, Japan and South Korea, which he claimed were taking advantage of America.

He also described the North American Free Trade Agreement (Nafta) as a disaster and appeared to threaten to pull US troops out of South Korea if the country does not come up with a satisfactory trade deal.

Mr Trump made 2,140 false or misleading claims in his first year as president,