US hits Russia with sanctions over election meddling

US treasury outlines variety of ‘nefarious attacks’, including interference in 2016 election 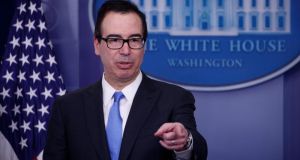 US treasury secretary Steve Mnuchin: “The administration is confronting and countering malign Russian cyber activity, including their attempted interference in US elections, destructive cyber attacks, and intrusions targeting critical infrastructure,” he said in a statement. Photograph: Shawn Thew/EPA

The US accused Moscow of staging a series of cyber attacks on US infrastructure including energy, nuclear, and aviation sectors as it unveiled a series of sanctions against Russians.

The US treasury said it was designating five groups and 19 individuals as part of efforts to respond to what treasury secretary Steven Mnuchin said were “nefarious attacks”, including the interference in the 2016 elections.

“The administration is confronting and countering malign Russian cyber activity, including their attempted interference in US elections, destructive cyber attacks, and intrusions targeting critical infrastructure,” Mr Mnuchin said in a statement.

“These targeted sanctions are a part of a broader effort to address the ongoing nefarious attacks emanating from Russia. Treasury intends to impose additional [legal] sanctions, informed by our intelligence community, to hold Russian government officials and oligarchs accountable for their destabilising activities by severing their access to the US financial system.”

In a statement, the treasury said that Russian government cyber actors have since 2016 targeted US government entities and “multiple US critical infrastructure sectors” – among them energy, nuclear, commercial facilities, water, aviation, and critical manufacturing sectors.

It also said the recent use of a military-grade nerve agent in an attempt to murder two UK citizens was sign of “reckless and irresponsible conduct” by the country’s government.

“We’re going to increase pressure until they change their behaviour and become a responsible member of the international community,” said a senior US national security official.

Among the entities targeted by the treasury sanctions are the Federal Security Service, which is Russia’s key intelligence organisation, as well as the Main Intelligence Directorate, or GRU. It also sanctioned the Internet Research Agency, accusing it of taking actions aimed at undermining electoral processes.

The sanctions hit the three entities and 13 Russian individuals indicted by special counsel Robert Mueller last month for interference in the 2016 presidential election.

In February, Mr Mueller charged the Internet Research Agency and linked companies and individuals with operating a well-funded propaganda campaign from within the US to “sow discord” and support the Trump presidential campaign while attacking Hillary Clinton.

The treasury’s announcement on Thursday echoed Mr Mueller’s indictment and said the Internet Research Agency had sought to “interfere with the 2016 US election”.

According to US officials, Russia tried to get into America’s energy grid, a breach that has alarmed national security agencies and bears out long-held concerns at the Pentagon that Moscow will seek to disable critical US infrastructure.

A senior US national security official said the Trump administration had uncovered cyber actors conducting network reconnaissance on the systems that run US factories and the energy grid.

Officials appealed for the public to be wary of “spearfishing” emails, among other malware, and to report any suspicious activity to the FBI. The senior national security official said hackers conducted a multi-stage attack “to collect information pertaining to industrial control systems – the systems that run our factories and our grid”.

In announcing the sanctions, officials highlighting the recent cyber attack known as NotPetya, which it said was the most destructive and costly attack in history.

“The idea here is that we’ve made clear the rule, we’ve started to make clear the penalty associated with this rule,” said the senior national security official.

“Russia’s behaviour, or lack thereof, on the world stage is continuing to trouble us and we are continuing to press back in meaningful ways,” said the official. “By no means will this constitute the end of our ongoing campaign to instruct Mr Putin to change his behaviour.” – Copyright The Financial Times Limited 2018