A victory for China’s leader – but what is ‘Xi Jinping Thought’?

With his theory accepted into the constitution, the president’s hand will be on everything 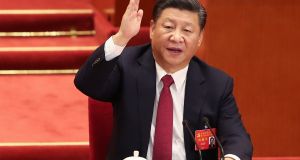 Chinese president Xi Jinping at the closing of the 19th Communist Party congress. What Xi is doing, and why his philosophy has joined the top three with Mao and Deng, is heralding a “new era” of Chinese history. Photograph: Lintao Zhang/Getty Images

China’s ruling Communist Party has enshrined in its constitution the “Xi Jinping Thought on Socialism with Chinese Characteristics for a New Era”, an unwieldy title for an arcane theory that gives the leader a status almost as elevated as founding father Mao Zedong and pushes him ahead of his predecessors.

More than 2,200 delegates gathered in the Great Hall of the People for the closing session of the twice-a-decade Communist Party congress raised their hands in unison to approve the amendments, and there were no dissentions.

According to the official resolution, Xi Jinping Thought “sets forth the basic policy for upholding and developing socialism with Chinese characteristics in the new era, and establishes the goal of securing a decisive victory in building a moderately prosperous society in all respects and then embarking on a journey to fully build a modern socialist China”.

A sterling example of Marxist-Leninist dialectic, but what exactly is Xi Jinping Thought?

“Socialism with Chinese characteristics” has been around for years and predates the party general secretary, president and military chief, so the key to understanding Xi Jinping Thought is the reference to a “new era”.

What Xi is doing, and why his philosophy has joined the top three with Mao and Deng, is heralding a “new era” of Chinese history. His predecessors were custodians of the achievements of Mao, who led the revolution and founded the country, and Deng, who transformed the economy and opened up the country.

This third era of development will extend the Communist Party’s reach into all areas of life and ratchet up controls of areas like the internet, fighting corruption and tightening security. It means building up a world-class military to back China’s growing influence in the region. And transforming China into a genuine global player.

Until now the list of Chinese leadership political theories enshrined in the constitution include “Mao Zedong Thought”, “Deng Xiaoping Theory”, Jiang Zemin’s “Three Represents” and Hu Jintao’s “Scientific Outlook on Development”.  Neither of Xi’s predecessors gets a name-check in the list, which is why the eponymous “Thought” is seen as a victory for the president and a sign that he is extremely powerful in the party.

No other leader since Mao has had an eponymous ideology included in the document while in office. Deng’s name was added after his death in 1997. Also, a “Thought” trumps a “Theory”, meaning Xi has an edge on Deng.

Steve Tsang, director of the Soas China Institute in London, told The Irish Times that the theory can be boiled down into several main points.

“China has found its way to development and to make itself great again, and this is called socialism with Chinese characteristics under the leadership of the party as directed by Xi,” said Tsang.

This means China will not be copying from others or be guided by experimentalism – what Deng called “crossing river by feeling the stones” – but will now move in its own direction, set by Xi.

“The key instrument for taking China to the promised land, outlined in the 30 years vision articulated by Xi, is the Communist Party, which will be put under strict discipline and required to support fully Xi to ensure it takes control on everything and everywhere in China,” he said.

China’s modernisation programme will continue, and it will also abandon the Deng principle of “hiding our capabilities and biding our time”, instead taking centre-stage in global affairs.

“To sum it up in one sentence, it is to enhance the Leninist nature of the Communist Party so that it can and will perform a leadership role in everything everywhere in China, including in promoting the free market,” said Tsang.