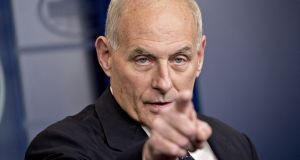 White House chief of staff John Kelly said an investigation was under way into the circumstances surrounding the ambush that killed four US troops in Niger earlier this month. Photograph: Andrew Harrer/Bloomberg

White House chief of staff John Kelly defended US president Donald Trump’s handling of a phone call with the widow of a fallen US soldier as the four-star general opened up about the death of his own son in Afghanistan in 2010.

Mr Kelly, who succeeded Reince Priebus as Mr Trump’s chief of staff this summer, launched a strong attack on media coverage of the deepening scandal, in an unexpected appearance in the White House press room on Thursday.

The intervention came following days of controversy over Mr Trump’s handling of a phone call with Myeshia Johnson, the widow of a US solider killed in an ambush in Niger earlier this month.

Florida congresswoman Frederica Wilson, who was in the car with Ms Johnson when Mr Trump called her and listened to the conversation over speakerphone, claimed that the president had told Ms Johnson her husband “knew what he signed up for”. The president has since disputed the account, accusing the democratic congresswoman of politicising the controversy.

The retired general said he was “stunned” that a member of Congress had listened into the conversation. “When I was a kid a lot of things were sacred in this country. Women were sacred, the dignity of life was sacred, religion was sacred . . . I just thought the selfless devotion that brings a man or a woman to die on the battlefield, I just thought that was sacred.” He said he had spent an hour and a half on Wednesday walking through the tombs in Arlington cemetery, the resting place for thousands of fallen American soldiers – “some of whom I put there because they were doing what I told them when they were killed”.

Mr Kelly confirmed that an investigation was under way into the circumstances surrounding the ambush that killed four US troops in Niger earlier this month.

John McCain, the chair of the senate armed services committee, said he would consider issuing a subpoena as questions intensified over the incident.

Also on Thursday, former US president George W Bush launched a stinging attack on a political culture obsessed with “conspiracy theories and outright fabrication” as he called on democracies not to “turn inward”.

In a speech in New York, the 71-year-old former president used a rare public appearance to criticise a society where “bigotry seems emboldened”.

Though Mr Bush did not mention President Trump by name, his comments were perceived as a barely-veiled criticism of him, and reflective of a growing divide between the Republican party establishment and the Trump White House.

“In recent decades, public confidence in our institutions has declined . . . Bigotry seems emboldened. Our politics seems more vulnerable to conspiracy theories and outright fabrication,” Mr Bush said at a forum in New York.

Pointing out that “our young people need positive role models,” he said: “Bullying and prejudice in our public life sets a national tone, provides permission for cruelty and bigotry, and compromises the moral education of children.”

Mr Bush’s speech was delivered days after Mr McCain used a speech in Philadelphia to criticise the current administration’s “half-baked, spurious nationalism” which he said was “cooked up by people who would rather find scapegoats than solve problems”.

Mr Bush’s speech, which also urged Americans to reject white supremacy, came hours before white supremacist Richard Spencer was due to deliver a speech at the University of Florida.

A heavy police presence was in place at the university ahead of the speech, which was due to take place two months after a far-right rally in Charlottesville turned violent, leaving one person dead.