Death of Maltese journalist ‘could be linked to fuel-smuggling network’ 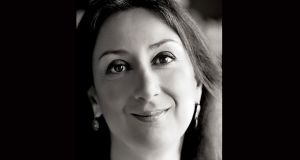 Daphne Caruana Galizia, an investigative journalist who was killed in a car bomb near her home in Malta on October 16th. Photograph: The Malta Independent via AP

There are possible links between the murder of the investigative journalist Daphne Caruana Galizia, who was killed by a car bomb in Malta last week, and an Italian investigation into an illicit fuel-smuggling network, according to a senior Italian prosecutor.

Carmelo Zuccaro, a chief prosecutor in Sicily who is leading the fuel-smuggling inquiry, told the Guardian he “could not exclude” the possibility that some of the men who targeted in his investigation – which spans Libya, Malta, and Italy, and allegedly involves an organised crime network in Sicily – could be behind Ms Caruana Galizia’s murder.

“[She] worked in the past on articles about the fuel trafficking between Libya and Malta,” Mr Zuccaro said, adding that some of the people involved in his inquiry had been named by her in several articles.

While the investigation into the multimillion-euro fuel-smuggling ring has been under way for months, Italian authorities made a series of arrests days after Ms Caruana Galizia’s murder. None of those arrested have been formally accused of any involvement in the journalist’s death.

Darren Debono, a Maltese, was arrested on the Italian island of Lampedusa on Friday and charged with being part of the illegal Malta-based network, which allegedly has ties to Libyan militia leaders and has smuggled tens of millions of euro in fuel from Libya to markets in Europe.

Mr Debono has not been accused of any crimes in connection with the journalist’s murder. It is not clear how long he was in Lampedusa before his arrest or how he got there.

Police in Malta said they were “investigating all possible avenues” related to the journalist’s killing and had made contact with their counterparts in Italy immediately after Mr Debono’s arrest.

Mr Debono, a former Malta football player – he played against Ireland in the Euro 2000 qualifying campaign – was among the subjects of Ms Caruana Galizia’s journalism. In blogposts she published in February 2016, she said Mr Debono was a restaurant owner and fisherman who did “a lot of ‘business’ with Libya”.

She also claimed to have received an email threat from a relative of Mr Debono who was allegedly upset by some of her earlier work on the family’s activities. Ms Caruana Galizia wrote in her blog that Mr Debono was at risk of getting “blown up” after the murders of two other “fishermen” with business ties to Libya who had “been blown up in their cars”.

Two of Mr Debono’s former lawyers said they had not been in touch with him and declined to comment.

Attempts to collaborate with Maltese authorities on the oil-smuggling investigation had not been fruitful, Mr Zuccaro said. An international request for information submitted to investigators in Malta had gone unanswered for 18 months. Malta was “becoming a sort of crime haven for all kinds of mobsters”, he said.

Malta authorities said any claim that they were deliberately failing to co-operate with other jurisdictions on the case was “completely untrue and unjust”. The attorney general initiated court proceedings to gather evidence and hear witnesses within three months of Italy’s request in October 2016, a government spokesman said; two sittings have already been held and a third is scheduled. *

Italian prosecutors alleged in court documents that the criminal organisation at the heart of the fuel-smuggling case had trafficked €30 million worth of fuel in the last 12 months.

According to investigators, who made use of wiretaps, the fuel was smuggled from a refinery in Zawyia, Libya, and shipped to Malta, before being moved to Italy, Spain, and France.

Fahmi Bin Khalifa, a resident of Malta who was arrested in Tripoli in August, was the alleged mastermind of the group. Prosecutors said Mr Bin Khalifa was imprisoned under the Gadafy regime but released after the dictator’s death. They believe he became the leader of a militia group with connections to Libya’s national oil company and has smuggled weapons and people.

The illicit funds used in the operation were transferred through Tunisian shell companies and ended up in the United Arab Emirates, prosecutors said in court documents.

Investigators have alleged that the network also has ties to the Santapaola mafia crime family in Catania, Sicily, which was blamed for the 1984 murder of a Sicilian journalist Giuseppe Fava.

Prosecutors did not name Ms Caruana Galizia in their 284-page indictment of Mr Debono and others linked to the crime syndicate. But they described how Mr Debono had “expressed rage” against a panel of United Nations experts in 2016 after they told the security council how fuel was being smuggled from Libya through Malta.

The indictment records that Mr Debono was overheard on wiretapped conversations expressing anger about aWall Street Journal article on the topic, which he was convinced had influenced the UN experts’ findings.

“They are just copying and pasting what that asshole of a journalist wrote on the Wall Street Journal,” he allegedly told a friend. Ms Caruana Galizia had posted the WSJ article on her own blog, called Running Commentary.

Roberto Montalto, one of Ms Caruana Galizia’s lawyers, said the late journalist had never specifically mentioned Mr Debono, but generally did not pay much attention to threats she received.

Authorities in Malta, he said, were working on the understanding that the murder had been commissioned by a “local person” but that it was likely to have been committed on behalf of an international criminal organisation.