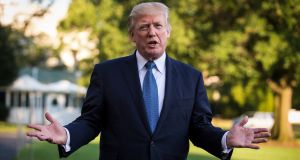 As early as next week, Donald Trump will make a decision on the US’s commitment to the deal. Photograph: Al Drago/The New York Times

The announcement that the 2017 Nobel Peace Prize is to be awarded to the International Campaign to Abolish Nuclear Weapons could not at come at a more critical time. Amid the ongoing stand-off between the United States and North Korea over the alarming rate of Pyongyang’s nuclear expansion, a fresh threat is looming.

As early as next week, US president Donald Trump will make a decision on the US’s commitment to the Iran nuclear deal.

It comes ahead of an October 15th deadline, by which the president must certify that Iran is in compliance with the 2015 agreement. Under the deal agreed by the Obama administration, the US president must update Congress every 90 days about the nuclear state’s compliance. So far he has done so, reluctantly. But there are growing signs that this time will be different.

Should he decertify Iran, Congress would have 60 days to decide whether to reimpose sanctions on the country.

Signals emanating from the administration suggest that the president will decertify, claiming that Iran is in breach of “the spirit” of the law. While this will technically leave the pact in place, in effect it will turn the problem over to Congress, potentially reopening up the deal for negotiation.

Politically, this makes sense for Trump. Having constantly railed against the deal during the campaign – just last month, during his speech to the United Nations General Assembly, he described it as an embarrassment – he can be seen to his supporters to be following through on campaign pledges, while leaving the deal itself intact. But the prospect of the United States unravelling the deal has alarmed many in Congress and around the world.

By moving against the deal, Trump appears to be overriding his top advisers. Earlier this week, defence secretary James Mattis told the Senate armed services committee it was in the United States’s national interest to stick with the deal.

Secretary of state Rex Tillerson – who was this week forced to hold a press conference denying a rift with Trump – was more equivocal. “I don’t want to suggest to you that we’re not going to stick with the Iranian deal,” Tillerson said this week in Beijing. “The president will have to make that decision; ultimately, it’s what he wants to do.”

On Capitol Hill, where intense negotiations on Iran have consumed attention over the past week, several high-profile Republicans are leading the charge to try to change the deal, including senator Tom Cotton. Among the changes he and others are championing are a move to tackle the sunset clause. Currently the deal expires in 2025, potentially allowing Iran to renew its nuclear activities at that point.

Similarly, sceptics want to expand the parameters of the deal to include Iran’s role in the broader Middle East, amid concern about the state’s role in financing terrorist organisations such as Hizbullah.

But many members of Congress – even Democrats who opposed the original deal, such as Senate minority leader Chuck Schumer – do not want to reopen it, believing it is the best chance at controlling Iran’s nuclear capabilities.

The US’s European allies are even more alarmed. The Iran deal, which saw western powers agree to ease economic sanctions on Iran in exchange for greater international oversight into Iran’s nuclear activities, was negotiated by the so-called P5 group – the US, Britain, France, China, Russia – along with Germany. The European Union also played a central role.

European leaders including British prime minister Theresa May and French president Emmanuel Macron raised their concerns with Trump on the fringes of the UN General Assembly. The past few weeks have seen a concerted effort by the ambassadors of France, Germany and Britain in Washington, as well as the European Union’s ambassador to the United States, Irish man David O’Sullivan, to warn the United States against pulling out of the deal.

“The demise of this agreement would be a major loss,” O’Sullivan said at an Atlantic Council event last week. He and other European ambassadors have been meeting key members of Congress in recent days as fears loom about the future of the agreement.

For American allies, particularly in Europe, the idea of reopening the Iran deal, which is backed by a UN Security Council resolution, is a nightmare scenario – one that would question US commitment to international agreements and almost certainly disincentivise Tehran from continuing to curtail its nuclear activities. There are also concerns about the impact on European companies that have invested in the country.

With Trump expected to unveil his decision as part of a broader speech on US strategy in the Middle East next week, possibly on Wednesday, this could be a turning point in the world’s efforts to contain the nuclear threat.