America Letter: With new book, ex-secretary of state to give her take on US presidential campaign 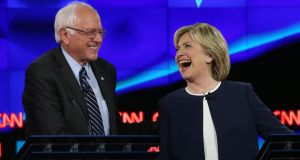 As the United States continues to focus on the hurricanes battering the Gulf of Mexico and the latest tensions between Donald Trump and the Republican party, behind the scenes Washington is aflutter with another imminent development.

Next week heralds the publishing event of the season.

Hillary Clinton’s book on the 2016 presidential election campaign, What Happened, will be published on September 12th.

Ten months after the presidential frontrunner unceremoniously lost the election to a property mogul and reality TV star, the former secretary of state is to give her take on the campaign. Her publishers, Simon & Schuster, promise she will spill the beans in the 500-page book.

“In the past, for reasons I try to explain, I’ve often felt I had to be careful in public, like I was up on a wire without a net. Now I’m letting my guard down,” says a quote from the introduction.

Unsurprisingly, Clinton is giving her first interview on the book on CBS’s Sunday morning show this weekend – Simon & Schuster is owned by the network. This is the seventh time Clinton has collaborated with the New York-based publisher on a book.

While the full manuscript has been kept under wraps – despite the book topping Amazon’s bestsellers list as people rush to pre-order a copy – some details have been leaked.

In particular, Clinton is said to blast presidential rival Bernie Sanders for unleashing “lasting damage” on the campaign, paving the way for Trump’s “crooked Hillary” message. She says that, while she wanted to hit back at Sanders during the campaign, she was advised by the party not to do so.

“President Obama urged me to grit my teeth and lay off Bernie as much as I could. I felt like I was in a straitjacket,” she writes.

She accuses Sanders of running to disrupt the Democratic Party, noting that the Independent senator is not a Democrat.

“That’s not a smear, that’s what he says,” she writes. “He didn’t get into the race to make sure a Democrat won the White House, he got in to disrupt the Democratic Party.”

Clinton also criticises President Barack Obama for failing to address the nation about the Russian attack on the election, along with then FBI chief James Comey and former vice-president Joe Biden.

As well as a series of media interviews, Clinton is due to embark on a promotional tour across the country.

But for many in the Democratic Party, the book is reopening old wounds.

With the Democratic Party preparing for next year’s midterm elections, some are wary of returning to the past and stoking up old tensions.

In particular, there is a danger that the Clinton book could refocus attention on the split between the Sanders wing of the party and more centre-ground Democrats, an issue that remains unresolved, as evidenced in this year’s battle for the head of the Democratic National Convention, which became a scrap between left-wingers and moderates.

Already, Republicans are focusing on the financial aspect of the book deal and accompanying tour. Although the figure for the deal has not been disclosed, Clinton reportedly received an $8 million (€6.6 million) advance for her previous book, Living History.

Both Hillary and her husband Bill have made tens of millions from their books and speeches, though this is not unusual in the US – former presidents and senior White House aides typically pen memoirs and command high fees. Barack and Michelle Obama reportedly signed a $60 million joint book deal earlier this year, while the former president was paid $400,000 for a speech in April.

But the money associated with Clinton’s book deal is likely to be seized upon by critics who are only too glad to remind voters of her previous speeches to Goldman Sachs and other Wall Street banks. Some of the “VIP tickets” at her tours in Canada cost more than $2,000 each, while top-category seats for her appearance in Washington on September 18th are retailing at $700, though $120 tickets are also available.

The irony that Clinton is due to visit Wisconsin – a state that she famously skipped during the campaign, but ultimately failed to win – has not been lost on her critics.

While Clinton may welcome the opportunity to put forward her side of the story, for many in the Democratic Party it may be less an act of catharsis than a focus on issues many hoped to consign to the past.