Trial opens of ‘Granny Jihad’ who followed son to Syria 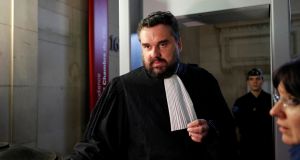 Christine Rivière is the oldest of some 30 French women imprisoned after returning from the war zone in Syria. Her age, 51, has earned her the nickname “Granny Jihad”.

Rivière, a native of Troyes in northeast France, went on trial on Thursday for “associating with terrorists”. She comes from France’s travelling community. She began work in a factory at the age of 16 and later became a night watchwoman.

Psychiatrists quoted by the prosecution say she has a “fusional relationship” with Tyler Vilus, the younger of her two sons. Love for Tyler motivated Rivière’s conversion to Islam. To be with him, she travelled to Tunisia, then Syria.

Rivière already had one son when she took up with Roland Vilus, an evangelical preacher from Guadeloupe, in 1990. She says she remained an atheist throughout that period. In 2011 Vilus left Rivière and her sons. Tyler was then an apprentice mason in Paris. He wore his hair in dreadlocks and smoked marijuana. A friend gave him a Koran, which he read in three days. He returned to Troyes, cut his hair and started praying.

Rivière converted soon after. Vilus went to Tunisia to join Islamists taking part in the Arab Spring. He participated in the sacking of the American embassy in Tunis.

Rivière followed her son to Tunisia. “I was looking for work because I wanted to settle there,” she told investigators, quoted by Le Monde. “But it wasn’t easy, because it’s like France. If you want to work, you have to take off your veil. I had my unemployment payments anyway.”

Bearded men and veiled women were looked down on in Tunisia, which Rivière likens to “a little France”. She returned to Troyes, and Vilus became a figher in Syria with Islamic State, which is also known as Isis. He adopted the name Abu Hafs Al Faransi.

Anti-terrorist investigators have studied more than 4,000 messages exchanged between mother and son via Skype. “I’m thinking of you. May Allah help you in your combat and give you victory. Mama,” she wrote in the summer of 2013.

When Vilus wrote to say he had been promoted to “emir” of a French-speaking unit, Rivière congratulated him proudly: “I’m not surprised ... I knew you’d get ahead. You’re cut out for it.”

Rivière told investigators she expected Vilus to be killed and wanted to spend as much time with him as possible. She visited him three times between summer 2013 and spring 2014. It is not uncommon for wives to follow husbands to the “caliphate”. It is far more unusual for a parent to do so.

If Vilus were killed, Rivière said, “I’d be happy for him because ... it’s a place in paradise, close to Allah. Like any good mother, I want what he wants.”

The prosecutor’s file contains photographs of Rivière carrying weapons and wearing an explosives belt in the streets of Raqqa. “In France you take pictures on the beach. Over there, with weapons,” she explained. She saved images of beheadings and crucifixions, which she tweeted.

Rivière was staying with her elder son, Leroy, and preparing to move permanently to Syria when she was arrested in July 2014. “I was with other Muslim women [in Syria] and I felt at home there,” she said. “I would rather live in Syria than in France, despite the bombardments and the shooting.”

A psychiatric expert said Rivière and Vilus shared a “joint delirium”. She found Islamist brides for her son on the internet. The first was Canadian, the second Belgian-Tunisian. He matched her up with an Islamic State sniper called Ahmed, 15 years her junior. She received a Kalashnikov assault rifle as a wedding present, according to Le Point magazine.

Vilus was arrested in Turkey, a year after his mother and four months before the November 13th, 2015, attacks that killed 130 people in Paris. Investigators say he was in contact with Abdelhamid Abaaoud, the planner of that massacre. They suspect Vilus intended to carry out an attack in France. He is now in prison in France, awaiting trial. Rivière went on hunger strike to demand that they be held in the same prison.

Prison personnel complain that “Granny Jihad” keeps trying to convert other female prisoners. If convicted she risks 10 years in prison.