Chelsea Manning row shows the faultlines in Trump’s US 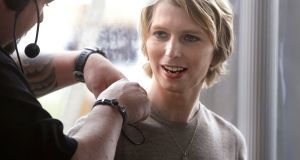 Chelsea Manning is assisted with a microphone before an appearance in Nantucket, Massachusetts, the US. Photograph: Steven Senne/AP Photo

September traditionally heralds the start of the academic year, when universities across the United States embrace the changing seasons and return to the familiar rhythms of college life.

This year the US’s oldest such institution, Harvard University, has found itself at the centre of an unwanted controversy that has thrown up questions about the limits of free speech and academic standards.

The controversy erupted after it emerged that Chelsea Manning, who leaked thousands of classified documents to WikiLeaks, had been appointed as a visiting fellow at Harvard’s Kennedy School of Government.

Manning, a transgender US army veteran who was formerly known as Bradley, was sentenced to 35 years in prison for espionage and other crimes in 2013. Her sentence was commuted by Barack Obama in one of his final acts as president and she was released from a Kansas military prison in May after serving seven years of her sentence.

On hearing of her appointment, Michael J Morrell, former CIA deputy director under Obama, resigned his fellowship at the Kennedy School, arguing that the move was “wholly inappropriate”. The current head of the CIA, Mike Pompeo, then cancelled a planned appearance at Harvard over the controversy, calling Manning a “traitor” to her country.

Pressure began to mount on Harvard, with the result that the following day Douglas W Elmendorf, the dean of the Kennedy School, called Manning shortly after midnight to inform her that her fellowship invitation was being revoked. Manning reportedly hung up on him.

In a statement, Elmendorf said that his decision to designate the former military analyst as a visiting fellow was a “mistake, for which I accept responsibility”. He said he had realised that “many people view a visiting fellow title as an honorific”, but the school had “not intended to honour [Manning] in any way or to endorse any of her words or deeds”.

Manning, who has made few public appearances since her release in May, shot back on Twitter. “This is what a military/police/intel state looks like. The CIA determines what is and is not taught at Harvard.” She later said she was “honoured to be the first disinvited trans woman visiting harvard fellow [sic]”.

WikiLeaks founder Julian Assange, who remains ensconced in the Ecuadorian embassy in London, also denounced the disinvitation on Twitter.

The controversy has highlighted the divided opinion about Manning’s actions. To some, Manning is a heroic figure who took a risk to expose information about the US military’s actions in Iraq to the public – among the information Manning passed to WikiLeaks while she was stationed in Iraq was video footage showing a US helicopter crew shooting on civilians. To others, she is a traitor who put people’s lives at risk by leaking more than 700,000 documents.

The controversy has also led to accusations that the Kennedy School – an institution that has always been a natural home for former political aides from Washington – is too close to Washington politics and is more concerned with the lure of celebrity than standards of intellectual rigour.

Manning was not the only high-profile appointee to the fellowship this month. Also appointed as visiting fellows were Sean Spicer, the former White House press secretary who resigned from his post after seven months in the Trump administration, and Corey Lewandowski, Donald Trump’s former campaign manager who was fired several months before the 2016 presidential election.

For Manning’s defenders, the notion that Spicer, who has been accused of misleading the public on a range of issues, including the size of the crowd at Trump’s inauguration, and Lewandowski, who was fired for manhandling a female reporter, remain in situ while Manning is dismissed is proof of Harvard’s misplaced priorities.

The Manning controversy also has an interesting political dimension. Given the Trump administration’s battle with leaks from the intelligence service and pledge to clamp down on whistleblowers, Harvard’s move to disinvite Manning could be seen as presenting a dangerous message at a time when many people in the FBI and CIA – including fired FBI chief James Comey – feel the need to hold the current president to account.

Similarly, Manning’s status as an LGBT activist, particularly on the issue of transgender rights in the military, is significant, given Trump’s pledge to ban transgender people from serving.

For Harvard, the decision to invite and then disinvite Manning has presented one of the country’s elite universities with a public-relations battle it could have done without.

It has also shed a light on the relationship between academia, politics and power in the United States that many believe is too close for comfort.