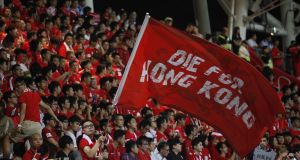 Hong Kong football fans booed, turned their backs and brandished their middle fingers during a performance of China’s national anthem at a friendly against Laos, despite new laws in Beijing making it illegal to mock the anthem.

It’s not the first time Hong Kong supporters have expressed their anger at Chinese rule on the terraces, and the Hong Kong Football Association (HKFA) has been fined twice for the fans’ behaviour.

It is, however, the first time the fans have booed the Chinese anthem since a new law protecting “The March of the Volunteers” came into effect on National Day, October 1st.

Hong Kong reverted to Chinese rule in 1997 and while it enjoys a high level of autonomy and freedom relative to the mainland, there are increasing signs of Beijing putting its stamp on the territory.

Anyone disrespecting the song can face 15 days in detention. Those attending public events are required to stand to attention and sing in a solemn manner when the anthem is played.

“It is not appropriate to express discontent about society this way,” Pui Kwan-kay, vice-chairman of the HKFA, told the RTHK broadcaster, saying he had repeatedly warned fans about heavier punishments.

The new rules are meant to bring treatment of the anthem up to speed with similar rules for rules criminalising desecration of China’s national flag, or the national emblem, which have been criminal offences for many years.

The booing at Mong Kok stadium is the latest sign of how many in Hong Kong chafe against direct rule by Beijing and there are growing calls for more autonomy for the former Crown colony, especially amid signs of erosion of the territory’s cherished autonomy.

Demonstrations such as the “Umbrella Revolution” of 2014 show how Hong Kong is divided, with many in the territory calling for independence, something Beijing would never tolerate.

On Monday, tens of thousands turned out to protest against the government following the jailing of three prominent young democrats, Joshua Wong, Nathan Law and Alex Chow.

The HKFA had been fined twice in the past as a result of supporters booing the anthem. In 2015, it was fined 10,000 Swiss francs (€8,722) when fans booed a World Cup qualifier against China, and were given a stern warning by football’s governing body FIFA.

The Laos match, which Hong Kong won 4-0, was watched by about 2,200 spectators and now authorities will be watching anxiously to see what happens when Hong Kong face Malaysia in an Asian Cup 2019 qualifying match on Tuesday.