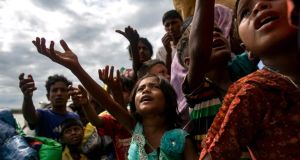 Ethnic cleansing: the UN has condemned Myanmar’s treatment of its Rohingya Muslim minority; these Rohingya children are begging for food after fleeing to Bangladesh. Photograph: Allison Joyce/Getty

World attention will turn to New York next week when the General Assembly of the United Nations meets for its 72nd session.

Representatives from more than 190 countries – including Ireland’s Minister for Foreign Affairs Simon Coveney and Minister of State Ciarán Cannon – will attend the annual event, although already there have been some high-profile cancellations.

Aung San Suu Kyi has announced she will not attend, as international condemnation of Myanmar’s treatment of its Rohingya Muslim minority grows. The UN has described the violence in the country as ethnic cleansing, and the UN Security Council is due to debate the issue on Wednesday.

Although the situation in Myanmar is likely to be one of several international crises to top the agenda, much of the focus is expected to be on President Trump, who will give his first address to the United Nations on Tuesday.

As Trump dismissed the UN as a club for ‘people to have a good time’, his first speech to the assembly has been highly anticipated

Given his previous comments on the UN – in December he dismissed the organisation as a “club” for people to “have a good time” – his first speech to the assembly has been highly anticipated.

Given his habit of veering off script, Trump’s remarks could dominate the agenda at next week’s meeting. Any remarks about North Korea or insight into his thinking on the Iran nuclear deal will be watched closely.

Much speculation has been made about Trump’s logistical plans. It appears that the US president will not stay at his home in Trump Tower, on Fifth Avenue, but reside instead at his golf club at Bedminster, in New Jersey. It is unclear how many national delegations will be keen to make the trip across the Hudson River for face time with the president – for many the real point of the annual gathering.

The United Nations has such great potential but right now it is just a club for people to get together, talk and have a good time. So sad!

But while Trump’s comments are likely to shape the agenda for the week, the General Assembly offers an opportunity for all members, including small states such as Ireland, to set out their stall and try to influence global policy.

This year’s networking opportunities will be particularly important for Ireland, which is seeking to secure one of the 10 rotating seats on the security council in 2021 and 2022.

UN membership has long been a crucial strand of Ireland’s foreign policy. Like the European Union, the United Nations is seen as an important multilateral forum that allows small states to have a voice in global policymaking.

Ireland’s involvement in UN peacekeeping efforts and its work with UN agencies on development aid have been two of the most tangible ways it has interacted with the institution since joining, in 1955.

Throughout the decades it has also worked to advance and make an impact on nuclear disarmament, peacekeeping, human rights and other policy priorities.

Next week Coveney will attend a signing ceremony for the Treaty on the Prohibition of Nuclear Weapons. The ceremony, on Wednesday morning, is an important moment for Ireland. Along with Austria, Brazil, Mexico, Nigeria and South Africa, it cosponsored the resolution, which was adopted in July by the United Nations, with the back of 122 countries.

Ireland’s involvement in UN peacekeeping efforts and development work have been two key contributions since it joined the institution, in 1955

Building on the principles of the UN Treaty on the Non-Proliferation of Nuclear Weapons of 1958 – itself a result of an Irish-led initiative – the new agreement pledges to outlaw nuclear weapons with the goal of eliminating them entirely.

Its limitations are obvious. Given the tensions between North Korea and the United States, talk of abolishing nuclear weapons seems absurd. All five permanent members of the security council, as well as Nato countries, voted against the resolution in July. In a joint statement after the vote, the United States, France and Britain said: “We do not intend to sign, ratify or ever become party to it,” adding that it “clearly disregards the realities of the international security environment”.

But the new agreement is the first legally binding treaty outlawing nuclear weapons, putting them on a par with chemical and biological weapons. By formalising opposition to nuclear weapons through a resolution backed by 122 countries, the treaty also brings international pressure to bear on nuclear-armed countries, forcing them to justify their retention of their arsenals.

In this sense the nuclear-prohibition treaty is a good example of both the limitations and the possibilities that characterise an institution like the United Nations, where smaller countries sometimes find it difficult to influence and shape the policy decisions of larger nations, particularly the five permanent security-council members.

Treaties such as the new nuclear-prohibition agreement show the soft power that all members of the UN can bring to bear when they work collectively, and how the UN can help hold the world’s biggest foreign-policy players to account.