Trump tackles yet another US institution with NFL outbursts

NFL team the Dallas Cowboys were booed by sections of Arizona's University of Phoenix Stadium for kneeling in protest prior to the playing of the US national anthem. Video: NFL 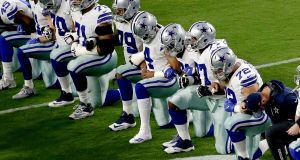 The Dallas Cowboys take a knee prior to the US national anthem, ahead of their NFL game against the Arizona Cardinals, in Glendale. Photograph: Matt York/AP Photo

Earlier this week I found myself in the departure lounge of a Philadelphia airport waiting for a connecting flight. It was the time of the evening when the daily airport bustle was beginning to die down, tired passengers were sipping coffee from polystyrene cups, and the cleaning staff were busy preparing for the next day.

As in many public spaces in America, TV screens beamed from every corner of the room. Most people paid little attention. But shortly after 8.30pm there was a subtle shift in atmosphere.

People paused, looked up, and turned to the TV with an air of expectation. The Dallas Cowboys were taking on the Arizona Cardinals, in Arizona’s first home game of the NFL season. But it wasn’t the football that was on people’s minds. All eyes were on the teams as they lined up.

The previous day, football teams across the country, and in London where two NFL teams met at Wembley, kneeled in a show of defiance against their president. Some teams stayed in their locker rooms during the national anthem in protest; others, like New England Patriots’ Tom Brady, opted to lock arms and stand rather than kneel. Many managers and team-owners joined their players in a show of solidarity.

On that Monday evening, the Dallas Cowboys also obliged. In a highly-charged atmosphere, the team kneeled just before the anthem, then stood and locked arms while it played. The team’s owner, Jerry Jones, who reportedly contributed to Trump’s inauguration, also took part.

Trump was evidently watching too. In tweets on Tuesday morning he wrote: “Ratings for NFL football are way down except before game starts, when people tune in to see whether or not our country will be disrespected!” and minutes later: “The booing at the NFL football game last night, when the entire Dallas team dropped to its knees, was the loudest I have ever heard. Great anger.”

This week the US president, who has managed to take on the judiciary, the intelligence services, the media and the Republican establishment during his eight months as president, turned his ire to another American institution – sport.

His outburst began the previous Friday during a Republican rally in Alabama.

“Wouldn’t you love to see one of these NFL owners, when somebody disrespects our flag, to say, ‘Get that son of a bitch off the field right now. Out! He’s fired. He’s fired!’” he said to the crowd.

The extraordinary remarks were a reference to the practice, started by Colin Kaepernick last year, of kneeling during the national anthem to protest at racial injustice, and in particular, the killing of black civilians by white police officers.

The issue has been rumbling beneath the surface of American football ever since. Kaepernick himself remains unsigned since March – most likely as a result of his interventions – but a small number of players had been continuing the practice at football games.

The uncomfortable reality underpinning the controversy is race – most NFL footballers are black, while team-owners are white.

The result of Trump’s comments at the rally was to light a match to a row that had been relatively dormant for months.

While most US presidents throughout history have strived to create unity, Trump is a president who thrives on divisiveness.

While in reality the issue is highly complex – Trump was correct in saying that many people booed the players at the games on Sunday and Monday and oppose Kaepernick’s actions– Trump succeeded in pushing the debate into the open, forcing people across the US to take sides and accentuating the divides that characterise this increasingly polarised country.

Trump’s explosive intervention was not just limited to the national anthem issue – he also appeared to suggest that NFL ratings were falling because of new rules introduced to make the game less violent. Berating the fall in ratings, he said that “if you hit too hard” there is now a 15-yard penalty. “They’re ruining the game! That’s what they want to do. They want to hit. They want to hit.”

His comments were particularly pointed in light of the recent reports that New England Patriots player Aaron Hernandez, who took his own life in prison in April while serving a life sentence, had suffered chronic traumatic encephalopathy (CTE), a progressive degenerative brain disease that has been linked to repeated blows to the head.

Although Trump’s intervention may ultimately have done more for Kaepernick’s cause, as players across the board backed the right to protest, the president once again showed his talent for stoking conflict and bringing to the surface the racial tensions in American society.